Corn (Old-crop Futures): The July 2018 contract closed 7.75 cents higher at $4.06 1/4. The contract extended its secondary (intermediate-term) uptrend last week to a high of $4.08 1/4. However, the sell-off seen late in the week took July corn back below resistance near $4.06 3/4, a price that marks the 61.8% retracement level of the previous downtrend from $4.34 1/4 through the low of $3.62. Given weekly stochastics remain above the overbought level of 80%, the contract is vulnerable to establishing an earlier than normal seasonal high and move into a secondary downtrend.

Corn (New-crop Futures): The December 2018 contract closed 6.50 cents higher at $4.21. New-crop December corn extended its seasonal uptrend to a new high of $4.22 3/4 last week. However, weekly stochastics are nearing 90%, indicating a sharply overbought situation and in position for a potential bearish crossover. This would again signal a possible move to a secondary (intermediate-term) downtrend.

Soybeans (Cash): The DTN National Soybean Index (NSI, national average cash price) closed at $9.64, down 14 cents for the week. It could be argued that cash soybeans remain in a secondary (intermediate-term) 3-wave downtrend, with the recent high weekly close of $9.83 (week of April 9) the peak of Wave B (second wave). Confirmation of this would be a weekly close below the Wave A (first wave) low weekly close of $9.50 (week of March 19). 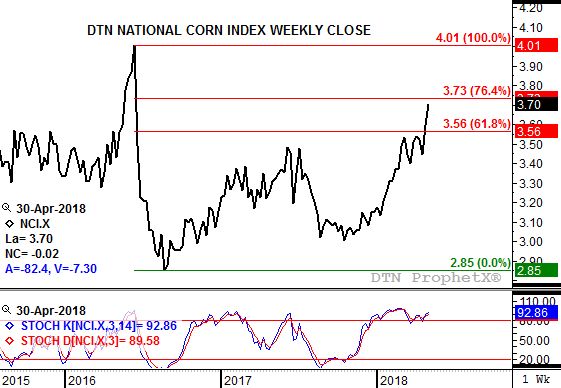