Corn (Cash): The DTN National Corn Index (NCI, national average cash price) closed at $3.52, down 2 cents for the week. The NCI looks to have established a double-top between its previous high of $3.57 and last week's peak of $3.56. A new secondary (intermediate-term) 3-wave downtrend would be confirmed if cash corn falls below the interim low of $3.37, a price that was also a test of support at the 33% retracement mark of the previous uptrend from $2.95 through the $3.57 high.

Corn (Old-crop Futures): The July 2018 contract closed 2 1/2 cents lower at $3.94 1/2. Despite the recent rally, the contract still looks to be in a secondary (intermediate-term) downtrend. This is based on the bearish crossover by weekly stochastics the week of March 12 that occurred in conjunction with a bearish reversal by the contract itself. Support is the interim low (between the previous high of $4.02 3/4 and the recent peak of $4.01) of $3.77 1/2. This price is also a test of support marking the 61.8% retracement level of the previous uptrend from the low of $3.62.

Corn (New-crop Futures): The December 2018 contract closed 1 3/4 cents lower at $4.10 3/4. The contract's secondary (intermediate-term) 5-wave uptrend looks to have run its course, peaking at last week's high of $4.16 1/2. This was also a test of resistance near $4.17 3/4, a price that marks the 76.4% retracement level of the previous downtrend from $4.29 1/2 through the low of $3.79 1/4. Weekly stochastics are in position to establish a confirming bearish crossover above the overbought level of 80%, following the initial crossover the week of March 12.

Soybeans (Cash): The DTN National Soybean Index (NSI, national average cash price) closed at $9.83, up 21 cents for the week. The weekly chart for the NSI remains a confusing mix, with the most recent technical signal a bearish reversal the week of March 5, though last week saw the cash market leave a bullish price gap before peaking at $9.89. Technically, almost anything could happen given this weekly chart meaning a sharp sell-off or continued rally are equally likely.

Soybeans (Old-crop Futures): The July contract closed at $10.65, up 20 1/4 cents for the week. The weekly chart for the futures market is nearly as confusing at that of the cash market. The previous week saw the July contract post a bearish outside range, before rallying last week. Meanwhile weekly stochastics have yet to establish a bearish crossover above the overbought level of 80%. For now resistance is at the previous high of $10.90 1/4 (week of February 26) and low of $9.94 1/2 (week of April 2).

Soybeans (New-crop Futures): The November 2018 contract closed at $10.49 1/2, up 16 1/4 cents for the week. The new-crop contract remains as confusing as the cash market and old-crop futures. The previous two weeks saw Nov beans post a bullish outside range followed by a bearish reversal. The last week saw the contract gain bullish momentum again to test the previous week's high of $10.60. Technically the next move still looks to be down, and if so, initial support is pegged at $10.27 3/4. This price marks the 23.6% retracement level of the previous uptrend from $9.23 1/2 through the $10.60 high. 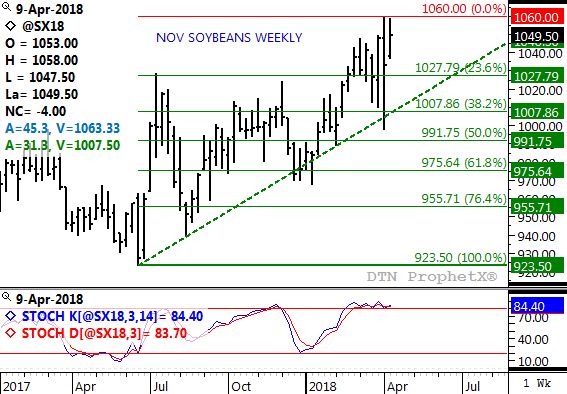