Feeder Cattle: The May contract closed $1.60 higher at $135.625. The contract's secondary (intermediate-term) 3-wave downtrend looks to have come to an end last week. Following a new low of $128.875, the contract posted a sharp rally to establish what looks to be a spike reversal. Weekly stochastics remain below the oversold level of 20%.

Lean Hogs: The June contract closed $3.275 lower at $73.275. The contract's secondary (intermediate-term) trend looks to have rolled from down to up last week. Despite the lower weekly close, the contract posted a sharp rally off its new low of $70.25. This allowed weekly stochastics to establish a bullish crossover below the oversold level of 20%. Initial resistance is near $73.35, a price that marks the 23.6% retracement level of the previous downtrend from $85.50. Support is at last week's low.

Corn (Cash): The DTN National Corn Index (NCI, national average cash price) closed at $3.54, up 3 1/4 cents for the week. The market looks to be regaining its secondary (intermediate-term) uptrend with last week's settlement above the previous high weekly close of $3.53 1/4. If cash corn falls back this coming week it would signal a sideways trend with support near $3.40 3/4.

Soybean meal: The May contract closed $2.30 higher at $386.30. While the contract's secondary (intermediate-term) trend still looks to be sideways, it did post a bullish outside range last week. With weekly stochastics bullish below the overbought level of 80%, May meal could look at testing its previous high of $404.00. 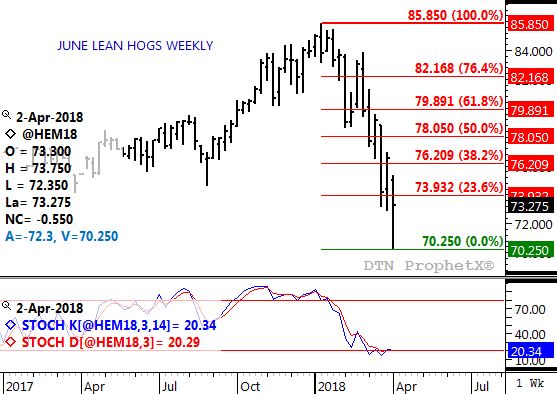