Lean Hogs: The April contract closed at $57.25, down $9.975 on the monthly chart. The nearby April contract has reached an important support area of the previous monthly low at $54.925 (September 2017) to the retracement support at $53.00. A move below the former would indicate the latter could give way, particularly with monthly stochastics still bearish above the oversold level of 20%.

Corn (Cash): The DTN National Corn Index (NCI, national average cash price) closed at $3.50 3/4, up 5 1/2 cents for the month. The NCI continues to test trendline resistance, calculated at $3.53 1/2 for March and $3.52 1/4 for April. Monthly stochastics are bullish and below the overbought level of 80%, indicating more room to the upside is possible.

Soybean meal: The May contract closed at $384.00, down $10.70 on the continuous monthly chart. Despite the lower monthly close the market remains in a major (long-term) uptrend on its monthly chart. However, the May contract is finding resistance near $400.30, a price that marks the 50% retracement level of the previous major downtrend from $541.80 through the low of $258.90. Monthly stochastics are still bullish below the overbought level of 80%. 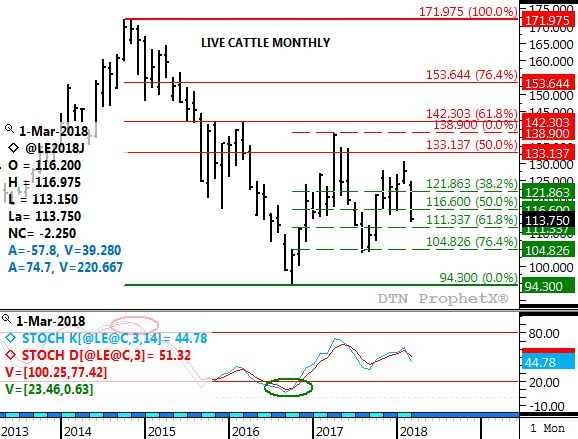