Live Cattle: The June contract closed $3.625 lower at $102.575. June live cattle remain in a 3-wave secondary (intermediate-term) downtrend, with last week's extension resulting in a test of support near $102.30. This price marks the 76.4% retracement level of the previous uptrend from $96.40 through the high of $121.45. Weekly stochastics are holding near the oversold level of 20%.

Feeder Cattle: The May contract closed $3.275 lower at $134.025. May feeders remain in a secondary (intermediate-term) 3-wave downtrend. Next major (long-term) support near $133.30. Weekly stochastics moved below the oversold level of 20%, in position for a possible bullish crossover.

Lean Hogs: The June contract closed $2.40 higher at $76.55. June lean hogs could be in transition from a secondary (intermediate-term) downtrend to uptrend. Last week's move to a new low of $72.95 followed by a sharp rally into the close looks to be a spike reversal. However, confirmation of a change in trend has not been seen, with weekly stochastics pulled back above the oversold level of 20%.

Corn (Cash): The DTN National Corn Index (NCI, national average cash price) closed at $3.50 3/4, up 10 1/2 cents for the week. Despite Thursday's sharp gains that led to a higher weekly close, the NCI remains in a secondary (intermediate-term) downtrend on its weekly close-only chart. That being said, a test of the recent high weekly close of $3.53 1/4 is possible, and if seen would establish a double-top formation to go along with the recent bearish crossover by weekly stochastics. Initial support is at $3.40 3/4, a price that marks the 23.6% retracement level of the previous uptrend from $3.00 1/2 through the high of $3.53 1/4.

Soybean meal: The May contract closed $6.10 higher at $384.10. The market's secondary (intermediate-term) trend still looks to be sideways, within a wide range between the 4-week low of $358.00 and 4-week high of $404.00. Confirmation of a change in trend would be a breakout of these parameters. 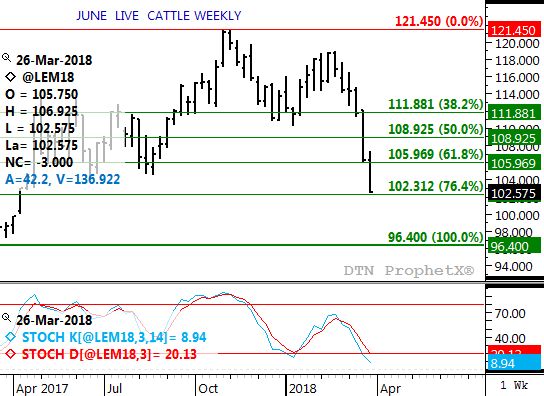