Feeder Cattle: The May contract closed $3.70 lower at $140.325. May feeders remain in a secondary (intermediate-term) 3-wave downtrend with next support at the Wave A (first wave) low of $139.20. Weekly stochastics are bearish but still well above the oversold level of 20%, indicating the contract still has momentum to move lower.

Lean Hogs: The April contract closed $2.40 lower at $65.45. April lean hogs extended its secondary (intermediate-term) downtrend below support near $66.95, a price that marks the 76.4% retracement level of the previous uptrend from $63.75 through the high of $77.25. Weekly stochastics have fallen below the oversold level of 20%, with next support for the contract at its previous low of $63.75.

Corn (Cash): The DTN National Corn Index (NCI, national average cash price) closed at $3.45, down 8 1/2 cent for the week. The has recently moved into a secondary (intermediate-term) downtrend on its weekly close-only chart, following a bearish crossover by weekly stochastics above the overbought level of 80%. Initial support is at $3.27 1/4, a price that marks the 23.6% retracement level of the previous uptrend from $2.85 1/4 through the recent high of weekly close of $3.53 1/4.

Soybean meal: The May contract closed $0.70 lower at $372.90. The secondary trend could be classified as sideways, though the contract is poised to establish a downtrend if it posts a new 4-week low below last week's low of $369.80. Resistance is at the recent high of $404.00. Weekly stochastics are bearish, though posting a crossover below the overbought level of 80%. 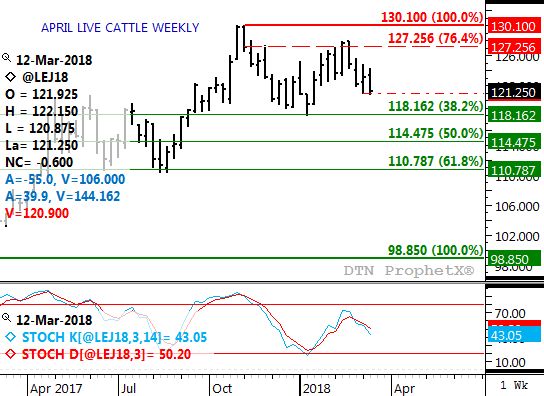