Crude Oil: The spot-month contract closed $0.93 lower at $63.37. Similar to Brent crude, WTI is showing a potential rollover to a secondary (intermediate-term) downtrend on its weekly chart. After posting a new high of $64.89 last week the spot-month contract closed lower. This led to a bearish crossover by weekly stochastics above 90%. Initial support is at the 4-week low of $58.32.

Distillates: The spot-month contract closed 2.66cts lower at $2.0584. Though last week's action in distillates looks similar to what was seen in Brent and WTI crude, there is an important difference: Distillates spot-month contract posted a bearish outside trading range before closing lower, establishing a bearish reversal. This is a stronger indicator of the beginning of a secondary (intermediate-term) downtrend, confirmed by a bearish crossover by weekly stochastics near 90%. Initial support is at the 4-week low of $1.9629, then the 23.6% retracement level of $1.8110. It should also be noted that last week's high of $2.1083 was also a test of major (long-term) resistance at $2.1094, setting the stage for a possible top to the major uptrend as well.

Ethanol: The spot-month contract closed 2.5cts lower at $1.332. Despite the lower weekly close the market remains in a secondary (intermediate-term) uptrend. The nearby futures contract tested initial resistance at $1.371 last week, a price that marks the 23.6% retracement level of the previous downtrend from $1.76 through the low of $1.251. Weekly stochastics remain bullish above the oversold level of 20%.

Propane (Conway cash price): Conway propane closed 0.25ct higher at $0.8825. Despite the slightly higher weekly close, cash propane remains in a secondary (intermediate-term) downtrend. The ongoing move now is Wave C (third wave) of an expected 3-wave move. Given that the market should move below the Wave A low of $0.8200, with support below that at $0.8071 and $0.7537. 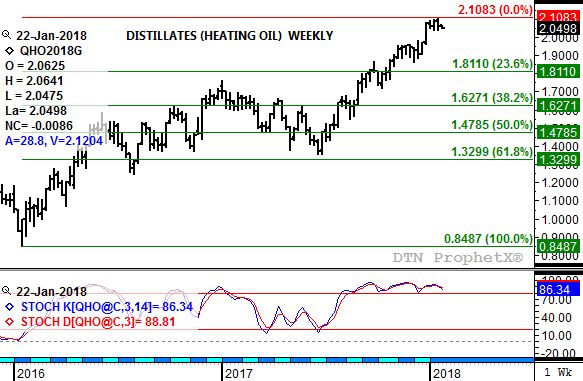