Live Cattle: The February contract closed $2.30 lower at $119.25. The contract remains in a 3-wave secondary (intermediate-term) downtrend. The recent Wave B (second wave) looks to have topped with a test of resistance near $123.075, a price that marks the 38.2% retracement level of Wave A from $131.95 through $117.575. Weekly stochastics are bearish but above the oversold level of 20%, indicating the contract has room to extend its downtrend to the next secondary target near $113.90.

Lean Hogs: The February contract closed $0.35 lower at $71.425. The contract's secondary (intermediate-term) trend remains sideways, needing a move beyond the previous high of $73.30 to reestablish a secondary uptrend. Weekly stochastics are bullish below the overbought level of 80%, with the most recent signal a bearish crossover above 80% the week of November 6.

Corn (Cash): The DTN National Corn Index (NCI, national average cash price) closed at $3.17 1/4, up 2 cents for the week. Cash corn's secondary (intermediate-term) trend remains up, though nearing a possible bearish rollover. The NCI tested resistance at $3.19 last week, posting a high of $3.19 before falling back slightly. This price marks the 38.2% retracement level of the previous downtrend from $3.57 1/4 through the low of $2.95 1/4. Weekly stochastics are above the overbought level of 80%, nearing a possible bearish crossover that would signal a move to a downtrend.

Soybean meal: The March contract closed $5.10 higher at $321.90. The contract posted a bullish outside week last week, indicating its secondary (intermediate-term) trend has turned up. However, weekly stochastics remain bearish above the oversold level of 20% hinting at possible continued downward momentum. Support is at the 4-week low, last week's low, of $315.50. 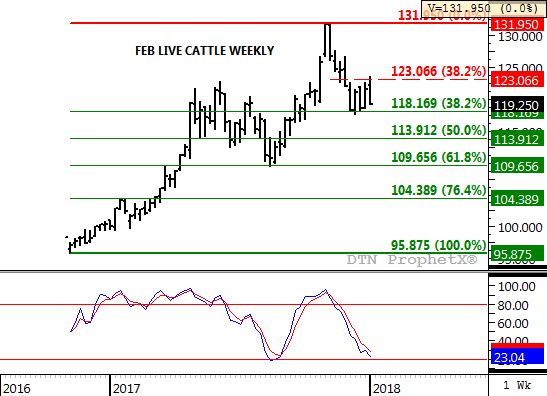