Live Cattle: The more active December contract closed $1.675 higher at $11.925. The contract's secondary (intermediate-term) trend remains up, with initial resistance at the 4-week high of $117.725. Beyond that resistance is pegged at the previous secondary high of $122.85 from the week of June 5.

Lean Hogs: The more active December contract closed $0.975 higher at $60.925 last week. The contract's secondary (intermediate-term) trend still looks to be up based on the bullish outside range posted the week of September 25. However, the market remains volatile with the contract's minor (short-term) trend on its daily chart nearing a downturn.

Corn (Cash): The DTN National Corn Index (NCI.X, national average cash price) closed at $3.05 1/4, down 4 1/2 cents for the week. The NCI.X remains in a secondary (intermediate-term) uptrend on its weekly close-only chart. Initial resistance is at $3.11 1/2, the close from the week of September 5. Beyond that the target is $3.23 1/2, a price that marks the 33% retracement level of the previous downtrend on the weekly close-only chart from $4.00 1/2 through the low of $2.85 1/4. Seasonally the NCI.X posts its low weekly close the first week of October, or last week's close.

Soybean meal: The more active December contract closed $3.40 higher at $319.20. The contract remains in a secondary (intermediate-term) uptrend, with initial resistance at the 4-week high of $320.90. 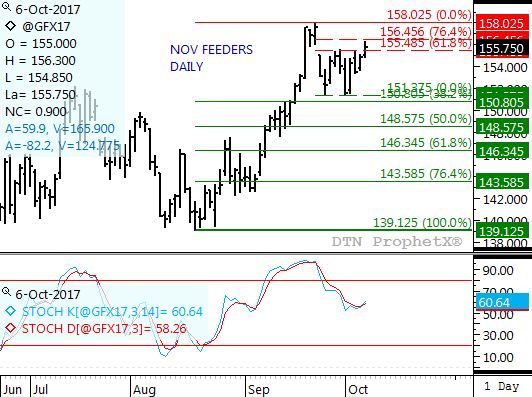