Feeder Cattle: The October contract closed $4.875 higher at $148.425 Despite still bearish weekly stochastics, October feeders are in position to turn the secondary (intermediate-term) trend up. A move to a new 4-week high beyond $149.125, last week's high, would signal a change in trend without stochastics crossing over below the oversold level of 20%.

Lean Hogs: The October contract closed $0.70 higher at $62.15 last week. The market remains in a secondary (intermediate-term) downtrend with support near $60.875. This price marks the 76.4% retracement level of the previous uptrend from $57.35 through the high of $72.25. Weekly stochastics remain bearish, above the oversold level of 20% meaning the contract could continue to see light selling interest.

Soybean meal: The more active December contract closed $6.40 higher at $305.20. The market looks to be in a secondary (intermediate-term) sideways trend between support at the recent low of $295.10 and resistance the 4-week high, last week's high, of $310.50. A move above this level would signal a move to a secondary uptrend that would then be confirmed by a bullish crossover below the oversold level of 20% by weekly stochastics. 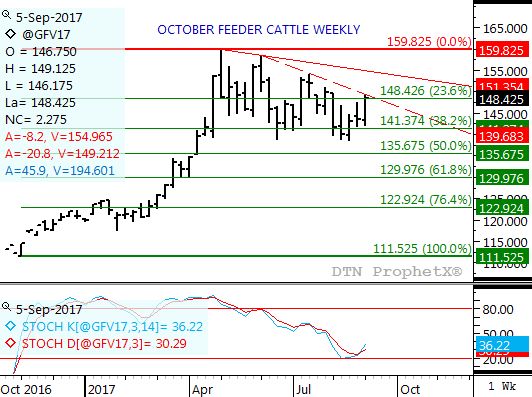