Live Cattle: The October contract closed $1.675 higher at $114.10. October live cattle are showing a number of conflicting signals on its weekly chart, most notably a continued secondary (intermediate-term) downtrend according to weekly stochastics while price action shows a double-bottom near technical support of $111.00 and last week's bullish outside range. If the contract takes out the $111.00 support it would suggest an extended sell-off to near $103.625, a price that marks the 61.8% retracement level of the previous uptrend from $91.75 through the high of $122.85.

Feeder Cattle: The October contract closed $3.075 higher at $149.925. Despite the higher weekly close the contract remains in a secondary (intermediate-term) downtrend. Initial trendline resistance this week is near $152.05, with longer-term trendline resistance pegged at $156.05. Weekly stochastics remains bearish, well above the oversold level of 20% indicating room for the contract to work lower. Initial support is near $141.375, then $135.675.

Lean Hogs: The October contract closed $0.275 higher at $66.775 last week. Despite the higher weekly close the market still looks to be in a secondary (intermediate-term) downtrend. While last week's action could be seen as a spike reversal, weekly stochastics remain bearish well above the oversold level of 20% indicating more downside is possible. Support remains at $64.80, then near $63.05. These prices mark the 50% and 61.8% retracement levels of the previous uptrend from $57.35 through the high of $72.25.

Corn (Cash): The DTN National Corn Index (NCI.X, national average cash price) closed at $3.25 1/4, down 6 cents for the week. The NCI.X remains in a secondary (intermediate-term) sideways trend on its weekly close-only chart. Resistance is at the double-top near $3.48 while support is between $3.24 and $3.16 1/2.

Soybean meal: The more active December contract closed $19.10 lower at $309.40. The market looks to be in a secondary (intermediate-term) sideways trend between support at the recent low of $295.40 and resistance the recent high of $348.70. Weekly stochastics are neutral-to-bearish indicating another week of pressure is possible. 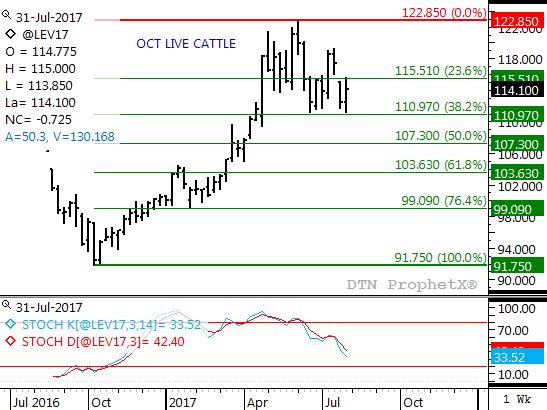