Feeder Cattle: The August contract closed $4.55 lower at $154.175. Secondary (intermediate-term) patterns look more clear-cut for August feeders than August live cattle. The contract continues to hold below its previous high of $163.50, with the most recent signal by weekly stochastics a bearish crossover above the overbought level of 80% the week of May 1. This indicates the secondary trend remains down with initial support at $150.85, a price that marks the 23.6% retracement level of the previous uptrend from $109.90 through the $163.50 high. The 38.2% retracement level is down at $143.025, and the 50% level at $136.70.

Lean Hogs: The August contract closed $0.35 higher at $82.05 last week. The contract failed to post a new 4-week high last week while stochastics show August hogs to still be sharply overbought. Also, weekly stochastics are nearing a potential bearish crossover above the overbought level of 80%. On its daily chart the contract looks to have established a minor (short-term) downtrend complete with a double-top near $82.70 and a bearish crossover by daily stochastics, most recently on May 30.

Corn (Cash): The DTN National Corn Index (NCI.X, national average cash price) closed at $3.48, up 12 1/2 cents for the week. The secondary (intermediate-term) trend turned sideways-to-up with last week's bullish breakout. However the NCI.X is already testing resistance at $3.51 3/4, a price that marks the 61.8% retracement level of the previous downtrend from $4.00 1/2 through the low of $2.73. Though weekly stochastics have climbed back above the overbought 80% level, a move above resistance by the NCI.X could lead to a test of the 76.4% retracement level at $3.70 1/2.

Soybean meal: The July contract closed $4.00 higher at $305.90. As discussed last week, July bean meal now looks to be in a secondary (intermediate-term) uptrend has turned up. Confirmation of this would be a move to a new 4-week high beyond $317.90. This likely won't happen this coming week, barring a volatile bullish move by soybeans coming out of a weather weekend Monday. Initial resistance for July meal is at $310.90, a price that marks the 23.6% retracement level of the previous downtrend from $357.20 through the recent low of $296.60. The 38.2% retracement level is up at $319.70. 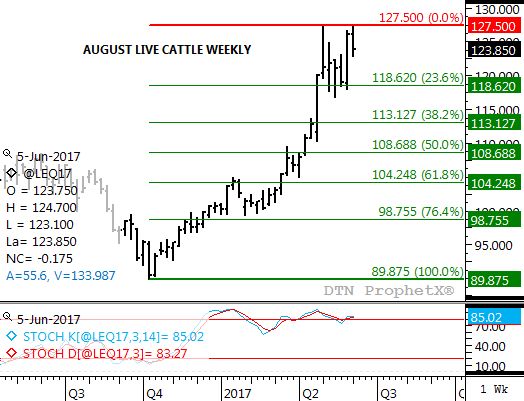