Live Cattle: The April contract closed $1.65 lower at $117.325. The secondary (intermediate-term) trend looks to have turned down last week. The lower weekly close resulted in stochastics posting a bearish crossover above the overbought level of 80%. If so initial support is near $112.65, a price that marks the 33% retracement level of the previous uptrend from $97.25 through the recent high of $120.325.

Lean hogs: The April contract closed $0.175 lower at $68.300 last week. The secondary (intermediate-term) trend is down following a bearish reversal by the futures contract. After setting a new high of $70.575 (for the uptrend) the contract fell below the previous week's low of $68.05 before closing lower for the week. Weekly stochastics posted a bearish crossover above the overbought level of 80%, confirming the move to a secondary downtrend. Initial support is pegged at $65.40, then near $62.80.

Corn (Cash): The DTN National Corn Index (NCI.X, national average cash price) closed at $3.26 3/4, down 7 1/4 cents for the week. The lower close led to a bearish crossover by weekly stochastics above the overbought level of 80%, setting the stage for a possible secondary (intermediate-term) downtrend. If the trend has turned down, initial support is pegged at $3.17 3/4. This price marks the 33% retracement level of the recent uptrend. Resistance is still up at $3.42 3/4.

Soybean meal: The March contract closed $5.70 lower at $343.00. The secondary (intermediate-term) uptrend looks to be nearing its end. Weekly stochastics below the overbought level of 80% indicate the market could retest resistance at $354.60, a price that marks the 61.8% retracement level of the previous downtrend, before turning down again. 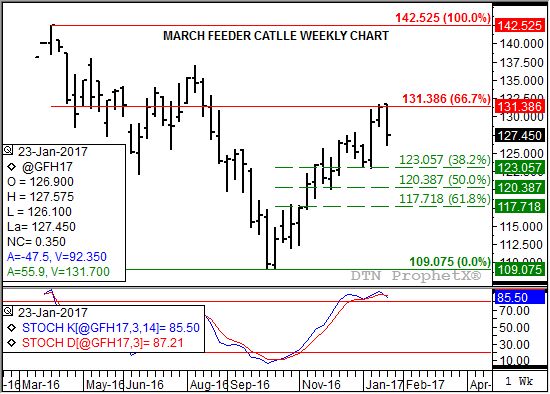