Live Cattle: The April contract closed $1.05 higher at $118.975. While the secondary (intermediate-term) trend remains up, it also looks to be nearing its end. April cattle tested resistance near $120.775 last week (high of $120.325), a price that marks the 67% retracement level of the previous downtrend. Meanwhile, weekly stochastics remain well above thee overbought level of 80% and are nearing a bearish crossover. The market's major (long-term) trend is up with resistance near $121.625.

Feeder Cattle: The March contract closed $1.975 higher at $131.275. Similar to live cattle, feeders remain in a secondary (intermediate-term) uptrend with the March contract testing resistance near $131.40. This price marks the 67% retracement level of the previous downtrend from $145.525 through the low of $109.075. Weekly stochastics are above 90%, indicating a sharply overbought situation.

Corn (Cash): The DTN National Corn Index (NCI.X, national average cash price) closed at $3.34, up 10 1/2 cents for the week. The secondary (intermediate-term) uptrend continues to strengthen with next resistance pegged at $3.42 3/4. This price marks the 50% retracement level of the previous downtrend from $4.00 1/2 through the low of $2.85 1/4. Weekly stochastics are above the overbought level of 80%, possibly limiting an extension of the trend beyond next resistance.

Soybean meal: The March contract closed $14.80 higher at $348.70. The market's secondary (intermediate-term) uptrend continues to strengthen. Weekly stochastics remain bullish, and still below the overbought level of 80%, indicating an extension of the uptrend is likely. The 61.8% retracement level is up at $354.60. 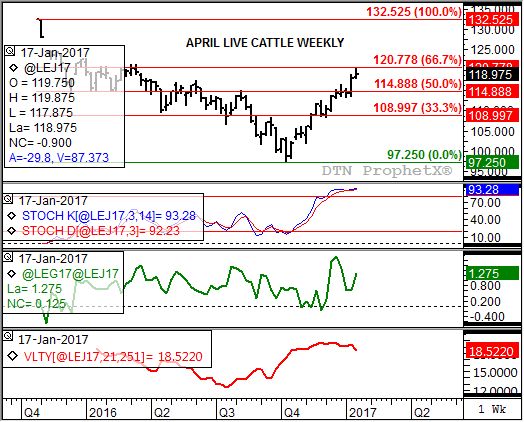