Live Cattle: The February contract closed $3.70 higher at $118.525. One week after establishing bearish signals, the market's secondary (intermediate-term) trend has turned up again. This again highlights how a market's major (long-term) trend can trump secondary signals. In this case the market's major trend is up with initial resistance pegged at $121.625, a price that marks the 33% retracement level of the previous downtrend from $172.75 through the low of $96.10. For more long-term trend information see the January 1 blog post.

Feeder Cattle: The March contract closed $5.50 higher at $129.30. Similar to live cattle, last week's bearish secondary (intermediate-term) signals were trumped by the market's major (long-term) uptrend. This turned the secondary trend up again. Initial major resistance in feeders is at the 4-month high of $131.55 from December.

Lean hogs: The April contract closed $1.425 higher at $69.625 last week. The secondary (intermediate-term) uptrend remains up as the April contract closed above resistance near $68.55. This price marks the 76.4% retracement level of the previous downtrend from $72.70 through the low of $55.05. However, weekly stochastics are above 90% indicating the market is sharply overbought making a bearish crossover more likely. The major (long-term) trend remains up as well with a target price of $71.557.

Corn (Cash): The DTN National Corn Index (NCI.X, national average cash price) closed at $3.23 1/2, up 3/4 cent for the week. While the secondary (intermediate-term) remains up the NCI.X continues to test initial resistance near $3.23 1/2. This price marks the 33% retracement level of the previous secondary downtrend from $4.00 1/2 through the low of $2.85 1/4. The 38.2% level is up at $3.29 1/4. Weekly stochastics are holding above the overbought level of 80% meaning a bearish crossover is increasingly likely. However, the major (long-term) trend still looks to be up. 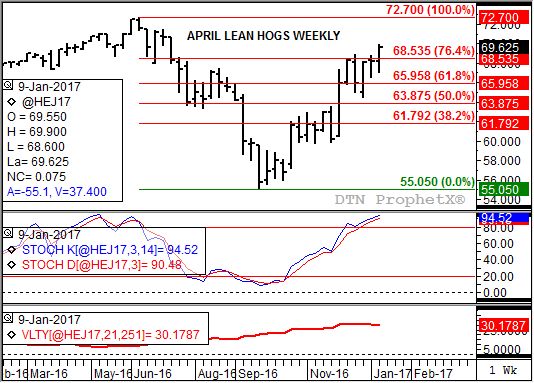