Live Cattle: The December contract closed $2.925 higher at $103.05. The live cattle market remains a difficult technical read. The December contract continues to trade near major (long-term) support at $102.00, despite last week's move to a new low of $98.90. Monthly stochastics remain in single digits meaning a bullish crossover could happen as soon as the end of the month. On the other hand, weekly stochastics remain above the oversold level of 20% while volatility increases and last Friday's CFTC Commitments of Traders report* showed noncommercial traders still holding a net-long futures position of 106,085 contracts. This leaves the market vulnerable to continued pressure from long-liquidation.

Feeder Cattle: The November contract closed $3.125 higher at $122.775. While Nov feeders posted a new major (long-term) low of $118.10 last week, it could be nearing a bullish secondary (intermediate-term) turn. Weekly stochastics are below 20% and nearing a bullish crossover that could signal the establishment of secondary uptrend.

Corn (Cash): The DTN National Corn Index (NCI.X, national average cash price) closed at $2.97 1/2, up 2 1/4 cent for the week. Weekly stochastics continue to indicate the secondary (intermediate-term) trend is up. However, the NCI.X needs to see a weekly settlement above the recent high weekly close of $2.98 (week of September 6) to confirm.

Soybean meal: The December contract closed $0.60 higher at $300.20. Dec meal posted a doji following the previous week's hammer on its weekly candlestick chart. Again, this shows indecision ruled the week. Weekly stochastics are in single digits and posted a bullish crossover by the narrowest of margins (5.47% over 5.46%). With Dec meal still holding near major (long-term) support at $300, the secondary (intermediate-term) trend looks to be in position to turn up. 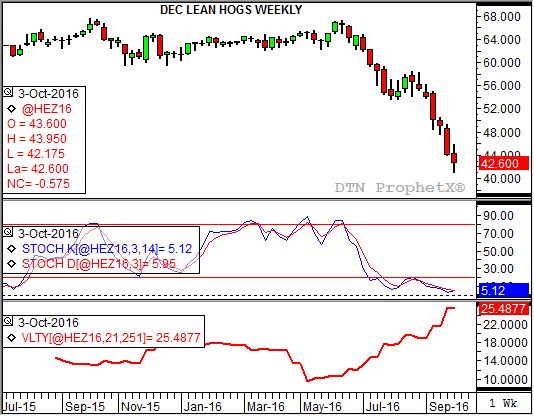