Live Cattle: The August contract closed $1.025 lower at $116.425. The secondary (intermediate-term) trend remains difficult to read in live cattle. However, the last secondary signal by weekly stochastics was a bullish crossover below the oversold level of 20% the week of September 22, 2015. This past week saw the more active August contract post what looks to be a spike reversal after leaving a bearish gap down to start the week. Closing near the weekly high of $116.65 creates the opportunity for the market to possibly establish and island bottom if it leaves a bullish gap.

Feeder Cattle: The August contract closed $1.225 lower at $146.70. The secondary (intermediate-term) trend remains sideways in the wide range between the contract low of $138.10 and near $155.40. However, August feeders look to have established a bullish spike reversal last week while leaving a potential double-bottom between the previous low of $138.10 and last week's low of $139.775. Initial resistance is at the 4-week high of $152.20.

Corn (Cash): The DTN National Corn Index (NCI.X, national average cash price) closed at $3.77 1/4, up 17 3/4 for the week. The secondary (intermediate-term) trend is up. Weekly stochastics remain bullish but nearing the overbought level of 80%. Initial major (long-term) resistance is pegged at $4.10.

Soybean meal: The July contract closed $9.90 higher at $402.60. While all indications are the secondary (intermediate-term) trend remains up, July meal closed well off its weekly high of $419.80 opening the door for a possible bearish crossover by weekly stochastics above the 90% level. If so the secondary trend could turn down with initial support at $367.20, the 33% retracement level of the uptrend from $261.70 through last week's high.

*The weekly Commitments of Traders report showed positions held as of Tuesday, May 24. 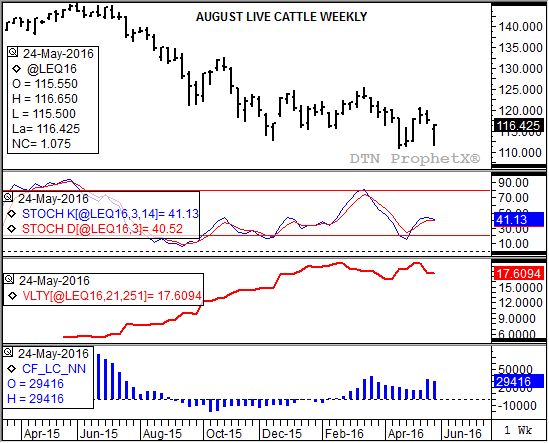