Live Cattle: The more active April contract closed $4.575 higher at $133.075. The key factor in live cattle remains its high volatility, with the weekly figure for the April futures contract calculated at 21.8% last Friday. Trends on both weekly (intermediate-term) and daily (short-term) charts are difficult to discern, with the major (long-term) trend on the monthly chart still sideways-to-down in the wide range between $138.90 and December's low of $121.975.

Feeder Cattle: The more active March contract closed $7.625 higher at $157.90. While indications are March feeder cattle remain in a wide ranging secondary (intermediate-term) sideways trend, the contract did post a bullish outside week last week. This would suggest a test of the 4-week high at $166.875 is likely. Retracement resistance is near $165.30, then $171.10. These prices mark the 33% and 50% levels of the previous downtrend from the high of $212.525 through the contract low of $141.70.

Lean hogs: The more active April contract closed $1.55 higher at $69.000 last week. Technically, the secondary (intermediate-term) trend remains sideways while the contract has seen a strong minor (short-term) uptrend from its low of $59.225 through last week's high of $69.675. However daily stochastics indicate the contract is sharply oversold, and given last Friday's close back below resistance near $69.05 a move to a minor downtrend could soon be seen. The contract also tested secondary resistance on its weekly chart near $69.55.

Corn (Cash): The DTN National Corn Index (NCI.X, national average cash price) closed at $3.46 3/4, up 6 1/2 cents for the week. While the secondary (intermediate-term) trend remains sideways, the NCI.X is nearing a move to an uptrend. The NCI.X left a bullish breakaway gap between the previous week's high of $3.40 1/4 and last week's low of $3.44, while putting itself in position to establish a new 4-week high above last week's peak (and close) $3.46 3/4 this coming week. A move above the December high of $3.56 1/2 would establish a bullish reversal on the monthly chart, signaling the major (long-term) trend has turned up again.

Soybean meal: The March contract closed $2.20 lower at $268.50. The secondary (intermediate-term) trend remains sideways between resistance at its 4-week high of $277.20 and support at the contract low of $263.80. Weekly stochastics are neutral-to-bullish below the oversold level of 20%. 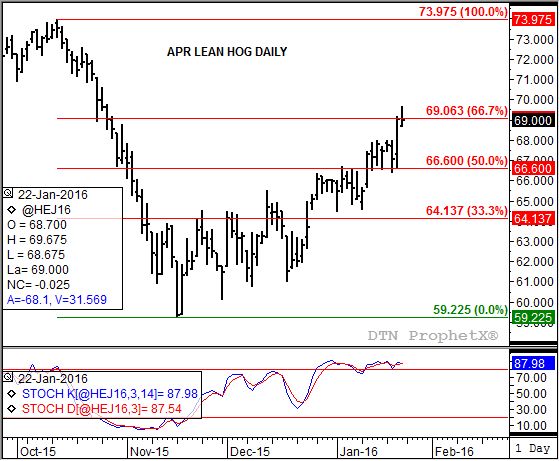