There has been a lot of talk lately regarding the fate of the Canadian dollar, more commonly known as the loonie. Recently on DTN, in-house Canadian Grains Analyst Cliff Jamieson blogged about how the Bank of Canada was "content to chart a divergent monetary policy from the United States, with speculation that further rate cuts lie ahead which could weaken the loonie further" (Canada Markets blog; Thursday, January 7, 2016). This past week saw a number of news stories with a common theme: One of the leading forecasters of the Canadian was projecting the currency to drop to a record low of 59 cents (U.S.) by the end of 2016, due in large part to those expected bank of Canada interest rate cuts.

Keep in mind this blog focuses on technical, or chart-based analysis. In his blog, Cliff also mentioned the relationship of the loonie to crude oil. Contributing DTN Columnist (and good friend from Dresden, Ontario) also wrote about the loonie in his latest Under the Agridome column this past Friday ("Our Declining Loonie Makes Canadian Farmers Numb to the Pain"), discussing crude oil's slide on the loonie as well as what it all means for Ontario cash grain prices.

An aside here: If you are even the slightest bit interested in what is going on north of the U.S. border, be sure to keep up on both Cliff's blog and Philip's column. Both do a great job. To find Philip's column, go to Town Hall in the News menu on DTN.

Now, Philip is an ag economist and understands and clearly explains all things supply-and-demand. Again, I focus more on technical indicators and at this time those are showing an interesting possible downside target for the loonie, due in large part to what's going on in crude oil.

Take a look at the attached monthly close chart for both the Canadian dollar (red line) and WTI crude oil (black line). The first item of interest is the correlation between the two (blue number) coming in at about 81%. Statistical theory tells us that correlation doesn't prove causation, but we aren't looking for cause here. What's most interesting to me is the relationship between the two markets.

Let say the loonie just wants to challenge its historic low before stabilizing. That would mean a continued slide to the January 2002 low near $0.62. Around that same time, November 2001, crude oil posted a low of $16.70 before starting a rally that would extend to the peak set in July 2008.

So, here's the bottom line from a technical perspective: Both crude oil and the loonie are sharply oversold according to monthly stochastics. Both are showing no sign of a turn in major (long-term) trends on long-term monthly charts. Both could look to test major lows established late in 2001 through early 2002. Is $0.59 possible? In this climate anything could happen, but the charts aren't indicating, a least for now, the likelihood is all that high. 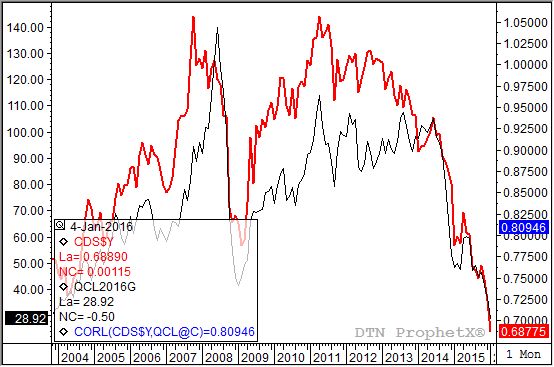