Feeder Cattle: The March contract closed $6.325 lower at $157.325. The secondary (intermediate-term) trend turned sideways as the futures contract posted a bearish outside week. Also, the minor (short-term) trend turned down with next support near $154.30. This price marks thee 50% retracement level of the previous minor uptrend from $141.70 through the high of $166.875. The 67% retracement level is down near $150.10.

Lean hogs: The February contract closed $0.05 higher at $59.85 last week. The secondary (intermediate-term) trend remains sideways between the wide range from the 4-week high of $61.75 and 4-week low of $54.95. The minor (short-term) trend on the contract's daily chart is sideways-to-up.

Corn (Cash): The DTN National Corn Index (NCI.X, national average cash price) closed at $3.34, unchanged for the week. The secondary (intermediate-term) trend is sideways-to-down. The NCI.X tested support between $3.29 and $3.23, with its low of $3.28, before rallying. Weekly stochastics remain neutral-to-bearish near the oversold level of 20%.

Soybean meal: The March contract closed $3.20 higher at $268.70. While the secondary (intermediate-term) trend remains down, the futures market is nearing a bullish turn. The March contract may have established a spike reversal last week after posting a new low of $263.80. Meanwhile, weekly stochastics are in position to establish a bullish crossover below the oversold level of 20% in the coming weeks. 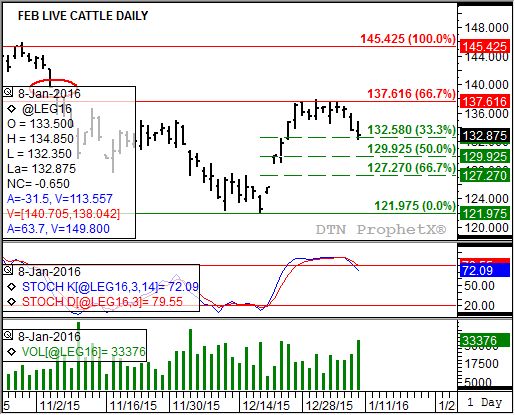