Corn (Cash): The DTN National Corn Index (NCI.X, national average cash price) closed at $3.34, down 12 cents for the month. While the NCI.X remains in its 5-wave major (long-term) uptrend, December's action established a bearish outside range meaning Wave 2 could now lead to a test of support near $3.23. This price marks the 67% retracement level of Wave 1 from the low of $2.8147 (October 2014) through the high of $4.0584 (July 2015). The 76.4% retracement level is down at $3.1082. Monthly stochastics are neutral-to-bearish above the oversold level of 20% indicating additional pressure could be seen.

Soybeans (Cash): The DTN National Soybean Index (NSI.X, national average cash price) closed at $8.19, down 18 cents for the month. The major (long-term) trend is sideways-to-down after the NSI.X failed to follow through on strength seen early in December. Support is at the previous low of $8.0857 (September 2015). Monthly stochastics remain in single-digits indicating a sharply oversold situation that could lead to renewed buying interest.

Soybeans (Futures): The March contract closed at $8.64 1/4, down 16.75 cents on the monthly chart. The major (long-term) trend remains sideways-to-down with support at the recent low of $8.44 1/4 (November 2015)). Monthly stochastics remain bearish below 20% indicating the market is in an oversold situation. 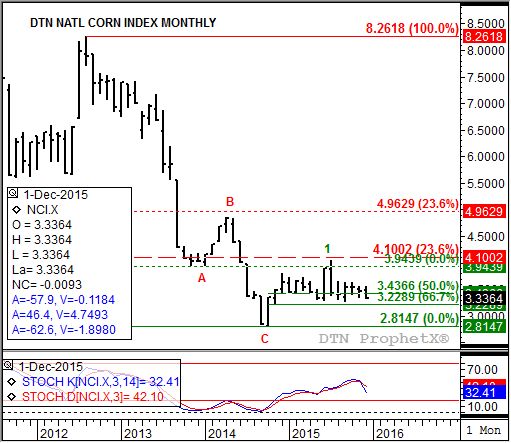