The Dow Jones Industrial Average (DJIA) looks like it could be headed lower after posting two bearish technical signals on its weekly chart last week. First, note that the DJIA (top study) moved below the previous 4-week low of 17,210.43 (red line) on its way to last week's low of 17,124.31. This followed the bearish crossover by weekly stochastics (bottom study, red circle) at the end of the previous week. This combination would suggest that the DJIA has seen the secondary (intermediate-term) trend on its weekly chart turn down.

Monday's session is expected to see the DJIA open higher following a 134 point rally in the futures market overnight, and overseas equity markets that were mostly higher. Still, the DJIA should turn lower with a possible target being the area of consolidation between roughly 16,630 and 15,980 established over the course of last September. Beyond that is the spike low of 15,370.33 from late August. 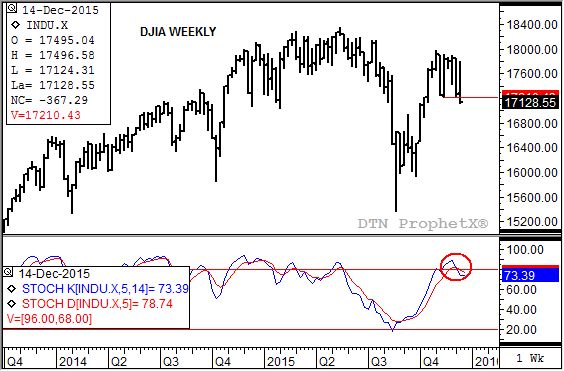