I had a question come in via email over the weekend: "How do you see the Elliott Wave count on the weekly continuous feeder cattle chart, from the $245 high to where we are now?" It's a great question with the analytical answer possibly, maybe, finally providing a glimmer of hope to this particular beleaguered market.

First, I pulled up feeder's continuous weekly chart. If you hold your eyes just right you can see what could be a 5-wave uptrend from the low of $149.275 (week of February 2, 2015) through the high of $227.80 (week of June 8). However, I want you to note that I did not start with the $245.20 high (week of October 6, 2014). Why? Because the secondary (intermediate-term) 3-wave downtrend that followed that high actually ended the week of the $149.275 low. The secondary 3-wave downtrend the market finds itself in now started this past June.

In order to make this downtrend fit 3-wave analysis we need to overlook the initial rally from late July through mid-August, allowing WaveA to extend to the $174.65 low. This makes the high of $196.30, a test of the 38.2% retracement level calculated near $194.95, the WaveB peak and last week's low the possible WaveC bottom. This analysis also fits better with weekly stochastics that are nearing a secondary (confirming) bullish crossover below the oversold level of 20%, with the initial bullish crossover occurring in conjunction with the now Wave 1 low of $174.65.

The problem with this analysis is that the market has shown no sign WaveC has actually come to an end. Last week's rally off its new low (the January contract closed at $152.125) was about mid-range, while Friday's CFTC Commitments of Traders report showed noncommercial traders added 1,523 contracts to their net-long futures position (as of the week ending Tuesday, December 8).

Given we are dealing with a new long-term low it is simpler to analyze feeder cattle on its monthly chart (attached). Here we see a much cleaner 3-Wave downtrend possibly nearing its end.

As with the weekly chart, the long-term monthly has not indicated the low is in, but it may be getting close. Monthly stochastics are well below the oversold level of 20% meaning a bullish crossover signaling a change in trend should happen sooner rather than later. It might take the futures market moving into the area between the 61.8% ($146.675) and 67% ($138.325) retracement levels to accomplish this though. 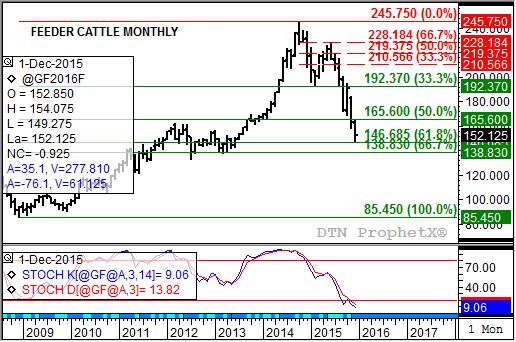