Frequent rains have slowed the progress of corn and soybean planting in southern Brazil, but the rains have been coming at a good rate in central Brazil to get planters out at a rapid pace, at least for the most part. According to the Mato Grosso Institute of Agricultural Economy (IMEA), at 18.6% complete, the state of Mato Grosso, Brazil's largest production state for soybeans, is well ahead of the five-year average pace of 10.9% at this time of year, and slightly behind last year's near-record pace of 20.3%.

The planting progress is due to mostly good weather the state has been seeing so far this spring. The annual wet season started on time or even slightly early this year, an unusual occurrence for La Nina conditions. The same on-time start to the wet season occurred in 2021 as well. What is interesting about 2021 when compared to 2022, is that in 2021 southern Brazil was very dry. That is a typical feature of La Nina as well -- for the southern states in Brazil to be drier than normal. So far, that has not occurred in 2022, though models are pointing to a more prolonged drier period next week going into November.

But going back to central Brazil, showers have wound down quite a bit this week. A stalled front produced widespread showers earlier in the week, but those have become much fewer and further between and shifting to the southwest. Across northeastern Mato Grosso, Goias, and Minas Gerais, showers have been scant this week, not consistent with the typical features of the wet season. Models do point out that showers should increase back into these areas in the middle or end of next week.

In the meantime, the drier stretch may hold producers back from increasing their planting. Soil moisture has increased since mid-September, but is still low due to months of dryness during the dry season, especially in the subsoil. Producers may wait a little longer to get more consistent rain into the region before planting on schedule. In contrast, the drier period with the promise of more showers next week could be the window of opportunity the region would like to go full-throttle on the planters and increase their fieldwork pace without a significant threat of rain to disrupt their progress. That will be known later.

But with a good planting pace to start the season, the early soybean crop is on track to finish at a reasonable time in January and February, leading to a likely good start for the safrinha (second-season) corn crop. That crop will face the potential challenges of a quicker end to the wet season, which is a typical La Nina feature. If soybean planting here in October does start to show some delays in the middle of the country, there would be heightened risks to that safrinha corn crop.

Farther south again, the state of Parana has had a slower planting pace compared to their five-year average. At 26%, they are behind the average of 34%, according to the government of Parana. Instead of dryness being an issue, it is the wetness. Persistent showers have limited fieldwork and some areas have yet to start planting because of the wet soils. With showers becoming more isolated next week, planting progress is likely to advance a bit farther.

For first-crop corn, wetness has also delayed the more rigorous pace it was on, being about two-thirds done across the primary states of Rio Grande do Sul and Parana, according to local governments. Along with the wetness in Parana, it has been cooler in Rio Grande do Sul, which has had a slowing effect as well. Cooler conditions are likely to remain in this area for the next week. 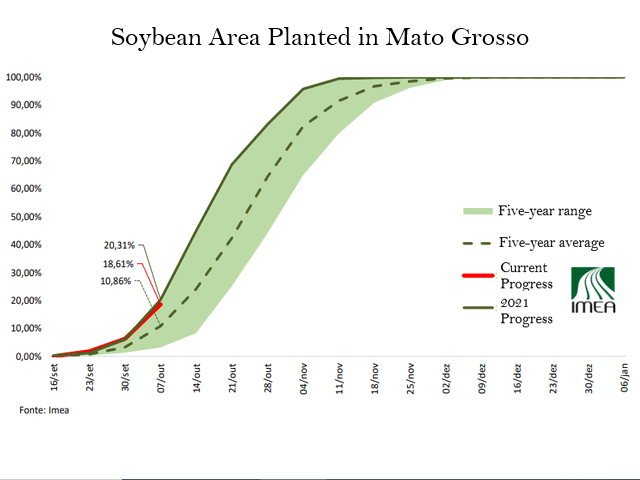