JEFFERSON CITY, Mo. (DTN) -- Roses may be red and violets may be blue, but what color are the highest-quality U.S. soybeans? The answer to that question may be up for debate soon.

On Nov. 8, USDA Agricultural Marketing Service (AMS) announced that the Federal Grain and Inspection Service (FGIS) will publish a proposed rule seeking public comment on a proposal to make changes to the U.S. Standards for Soybeans -- the rules that dictate how soybeans are graded and differentiate a "U.S. No. 1 Yellow Soybean" from other grades.

The driving force behind these yet-unseen proposed changes is "Soybeans of Other Colors," defined as soybeans that have green, black, brown or bicolored seed coats. In grain-grading circles, it is simply called "SBOC," and it is currently one of four grade-determining factors -- along with damaged kernels, foreign material and splits. In its announcement, USDA stated it has "received numerous requests from representatives of U.S. soybean producers and grain traders to remove SBOC" when describing the quality for soybeans.

Why? Because during the past two years, the number of soybeans failing to be certified as No. 1 and even No. 2 Yellow Soybean has increased significantly, which has affected their marketability and value at export.

The increase in SBOC has been dramatic. In the decade from 2011 through 2020, FGIS issued more than 869,000 official inspection certificates for soybeans. Of those, just 3,836 -- less than half of 1% -- reported SBOC results that did not meet grade criteria for U.S. No. 1 Yellow Soybean.

By contrast, in the past two years, that number has exploded to 31,448 out of 217,956 certificates -- more than 14.4% of all inspected soybeans. In fact, during 12 of the past 13 months, the total inspection certificates issued each month with SBOC exceeding the threshold for No. 1 Yellow Soybean was greater than in any full calendar year from 2011 to 2020. Simply put, SBOC has never been an issue like this. But is that enough reason to eliminate it as a grade-determining factor?

To understand why color has been such an integral component of soybean grading in the first place, one must look back on the evolution of this non-native legume and how it became one of the nation's most produced crops.

According to research compiled by the late soybean historian Theodore Hymowitz at the University of Illinois, the soybean was introduced to the American Colonies in 1765 as "Chinese vetches" by Samuel Bowen, a seaman employed by the East India Co. At first, most soybeans were raised as a forage crop rather than harvested for seed. However, as new uses were devised and new markets created, more effort was placed on increasing yield and improving quality. By the early 20th century, more growers were choosing to raise soybeans, and the colors of those beans ran the gamut.

There were yellow soybean varieties with names such as Mammoth Yellow, Manchu and Hollybrook; green varieties including Morse and Guelph; brown soybeans known as Virginia, Mammoth Brown and Biloxi; and black varieties such as Peking, Laredo and Tarheel Black.

U.S. soybean production grew from about 2.5 million bushels in 1920 to 9.5 million bushels in 1924. With the expanded interest in the crop, the USDA's Bureau of Agricultural Economics issued the first soybean quality standards and grades in 1925. Five color classes -- Yellow, Green, Brown, Black and Mixed -- were established to differentiate among end uses.

While speaking at the American Soybean Association's annual meeting in September 1925, J.E. Barr, USDA associate marketing specialist, said that while some manufacturers attached little importance to color, others are critical in their demands for straight colors.

"In many respects, the requirements of consumers more closely dictate what the standards of quality for a commodity shall be," he said. "It is true that consumers cannot demand what the grower cannot produce, but the efforts of the producer, together with that of the shipper or dealer, usually are directed toward giving the consumer what he wants because that is what he is willing to pay most for."

The soybean industry continued growing during the next decade and a half. In 1940, Congress amended the U.S. Grain Standards Act of 1916 for the first time, officially bringing soybean standards under the act. The following year, the factor "other colors" was eliminated in the grade table. However, a footnote that applied to No. 1 and No. 2 grade was added. It provided that No. 1 grade Yellow Soybeans and Green soybeans may not contain more than 2% of black, brown or bicolored soybeans, either singly or combined. The maximum allowable percentage for No. 2 grade Yellow or Green soybeans was set at 3%.

The change reflected the burgeoning market preference for yellow and green soybeans. Buyers wanted those beans and those beans alone -- without the presence of other colors -- for specific end uses. Establishing a tighter grade standard pushed soybean breeding and production toward these desired color traits.

The need for soybean oil and meal was heightened during World War II, which disrupted trade in other edible fats and oils. While a soybean's compositional traits gained in the conversation, the aesthetic of color remained. So much so that in 1949, the standards were tightened again.

Now, No. 1 Yellow Soybeans could not contain more than 1% of green, black, brown or bicolored soybeans, either singly or in any combination. The maximum percentage increased to 2% for No. 2 Yellow Soybeans and 5% for No. 3. Sound familiar? It should; those are still the allowable percentages for SBOC today.

Throughout the 1950s, 1960s and 1970s, the United States dominated world soybean production, accounting for as much as 75% of the planet's annual soybean crop. Predominantly, those soybeans were yellow. Yet, U.S. soybean standards continued to include classes for green, brown and black soybeans clear into the 1980s.

By the time it was decided that these classes of soybean were no longer used, eventually being eliminated in 1985, the only colorful beans left in any quantity were of the jelly variety sitting on President Ronald Reagan's desk. The change made it clear: Commercial U.S. soybeans are yellow, and anything else doesn't make the grade.

For nearly 40 years now, the definition of "Soybeans of Other Colors" has remained unchanged. The most recent review of the entire U.S. Standards for Soybeans took place in 2018 through a public notice. FGIS received comments. None made any mention of SBOC.

Of course, that was the year prior to the introduction of Enlist E3 soybeans, the overwhelmingly presumed culprit in this current color conundrum. Corteva Agriscience acknowledged the potential occurrence of off-color Enlist beans from the product's initial release, noting the color variation in some varieties appears as a light brown band connecting ends of the hilum and/or as light brown shadows on each side of the hilum.

At first, the off-color beans didn't seem to be an issue, but it's a numbers game. When Enlist beans had a 5% share of U.S. acres, their overall impact was negligible. To borrow from an old phrase, "The solution to pollution is dilution." Should a local elevator receive a single load of off-color Enlist beans, that load can be blended with other soybeans, "diluting" the issue.

Any elevator manager worth his salt knows how to blend grain to achieve desired results, but this solution only works if there are enough soybeans that don't have SBOC issues to blend with those that do. And when Enlist E3 beans reached market share of 35% in 2021, the issue in many places couldn't be blended away.

Corteva has stated that expression of the color variation has not been consistent enough to predict when or where it may be seen. This has seemed to be the case for the 2022 soybean crop.

Kyle Hankey is quality assurance specialist for Kankakee Grain Inspection in Essex, Illinois. He has been grading soybeans at the company for the past 18 years. He said the SBOC issues have continued this year but that it's not across the board. He noted that of the beans they graded, those coming out of Wisconsin seemed to have significantly higher SBOC percentages than those coming from west-central Illinois.

Hankey interacts regularly with international customers who purchase U.S. soybeans. He said that even though these off-color soybeans have been tested and found to be equal in terms of protein and oil composition, the skin-deep issue is still an issue for some.

"Most of the time, when I'm talking to people from another country, their biggest concern is the aesthetic of it and then the effect of the coloring on their end product," Hankey said. "I don't know if taking away color as a grading factor is going to alleviate the international market situation."

Presently, USDA AMS is still developing the proposed rule, so it's too soon to know exactly what revised soybean grading standards might be. Does the agency propose relaxing the maximum allowable percentages for SBOC? Or is color eliminated as a grade-determining factor altogether? Time will tell, but for Hankey -- like J.E. Barr back in 1925 -- the prevailing thought is that the requirements of consumers will more closely dictate what the standards of quality for a commodity shall be.

"I personally think SBOC still needs to be in there (as a grading factor). Otherwise, you lose the identity of what it is the product is supposed to be," Hankey said. "A product is only worth what somebody is willing to pay, so if they're not going to buy a product that doesn't meet their visual standard, then it's kind of hard to justify taking that away."

Even if expedited, USDA said the process of proposing and approving changes will take several months to complete, so beans harvested this fall will be graded under the current standards. What happens with the 2023 crop is anyone's guess.

However, when the debate begins, it should start with the same question as this article started: What color are the highest-quality U.S. soybeans? If the answer is "yellow," then SBOC as a grading factor remains relevant to ensuring the U.S. produces soybeans that set the world standard. 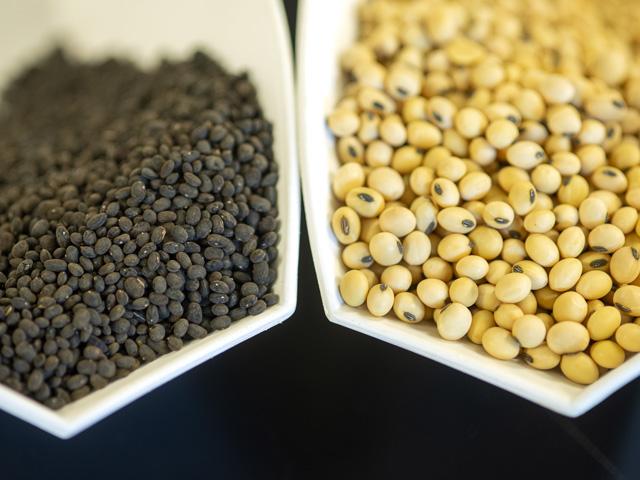