Soybean moisture content took a dive to 8% to 10% in many fields this fall. This late in the season, waiting for rain to restore some of that moisture isn't in the cards for many farmers. But there are a few other measures that can be taken to bring soybeans back from the brink of too dry, according to Ken Hellevang, North Dakota State University (NDSU) Extension agricultural engineer.

Keep in mind that it is illegal to add water to any grain crop, Hellevang told DTN. "However, it is legal to condition the grain by running fans moving air through the grain when the air humidity is at appropriate levels resulting in the grain moisture content being near the market moisture content," he said.

NDSU has issued the following news release on the topic. DTN is posting it here with slight edits.

Warm, dry weather can result in soybeans being too dry at harvest.

"The soybeans lose weight and become brittle, increasing the potential for handling damage when they are too dry," Hellevang said. "Also, producers lose money at lower moisture contents."

Farmers may want to condition soybeans that were harvested at lower moisture contents to bring the moisture content up to the market standard of 13%. On a 40 bushel-per-acre (bpa) yield, harvesting soybeans at 9% moisture content, rather than 13%, is equal to 1.8 bpa of lost weight. At $13 per bushel, that is $0.59 per bushel or $23.40 per acre.

Just as grain is dried with bin fans, soybeans can be conditioned by operating fans during periods with the desired air temperature and relative humidity.

"Conditioning requires high airflow rates for several weeks using air with an average relative humidity of about 70% to 75% to condition soybeans to 13% during normal fall temperatures of 30 to 60 degrees Fahrenheit," Hellevang said. "Be aware that the air will be heated 3 to 5 degrees as it goes through the fan, which reduces the air relative humidity slightly."

A conditioning zone develops and moves slowly through the bin in the direction of the airflow, which is similar to a drying zone in natural air drying. Conditioning occurs the fastest when the airflow rate, cubic feet of airflow per minute per bushel (cfm/bu), is high and the air is warm and humid.

The moisture-holding capacity of the air is related to the temperature. At temperatures below about 40 degrees, the air holds very little humidity and little conditioning occurs. Conditioning will be the most successful in a drying bin with a fully perforated floor and a fan that can deliver at least 0.75 cfm/bu.

Even with this airflow, moving a conditioning front all the way through the bin will probably take at least a month of fan operation. In most cases, not enough high-humidity hours are available in the fall to move a rewetting zone all the way through the bin. The conditioning can continue in the spring when outside temperatures average above about 40 degrees. You would need only a 3-horsepower fan to provide an aeration airflow rate of about 0.25 cfm/bu, but conditioning the beans would take about 90 days at that airflow rate.

Farmers should compare the cost of fan operation with the benefit of marketing at the desired moisture content. To estimate the cost of operating the fan, assume a 1-horsepower fan motor will use 1 kilowatt (kW) of electricity for each hour of operation. For example, if conditioning the soybeans takes 30 days of fan operation, that is 720 hours. Achieving an airflow rate of 0.75 cfm/bu on a 42-foot-diameter bin filled 20 feet deep with soybeans would require a 15-horsepower fan. The cost to operate the fan, assuming an electricity cost of 12 cents per kilowatt-hour is about $1,296. (720 hours x 1 kWh/hp x 15 hp x $0.12 kWh) Increasing the moisture content of 22,167 bushels of soybeans from 9% to 13% would increase the quantity of soybeans by 4.4% or 975 bushels. At a price of $13 per bushel, this is worth $12,675, which is more than the cost of operating the fan in this example.

If the fan is operated just in periods of very high humidity, such as during fog or when the relative humidity is near 100%, the soybeans in part of the bin would be too wet to be stored safely, about 20% or more. Mixing the wet layers with dry layers would reduce the spoilage risk and discounts for marketing wet beans. However, stirring increases the bean damage. Emptying the bin and moving the beans through a grain-handling system will provide only limited mixing because the majority of the grain comes from the top of the bin in a funnel shape with a center unloading sump.

Controlling the fan manually or on a time clock and operating it during the night and a portion of the day based on the measured humidity is one option, but fan and moisture control is not as accurate with this method, Hellevang said.

To avoid wetting the beans to moisture levels unsafe for storage, add a second humidistat to stop the fan when the relative humidity reaches very high levels, over 90%, or use a microprocessor-based fan controller that monitors temperature and humidity, and runs the fan only when air conditions will bring the crop to the desired moisture content. A disadvantage of these options is that the fan does not run as many hours.

Hellevang reminds farmers that soybeans expand when they absorb moisture, so a moisture content increase of more than a couple points could create enough pressure to damage the grain bin's bolted connections or even cause the bin to rupture. The bin warranty may be voided if damage occurs while conditioning grain.

One way to reduce the pressure is to unload some beans from the bin periodically, maybe three times, during the conditioning. Another way to reduce the damage potential is to use a negative pressure system to pull humid air down through the soybeans and remove the soybeans from the top of the bin as they are reconditioned. An additional way to reduce the pressure is to use a vertical-stirring auger to mix the beans periodically. Stirring the beans will increase the amount of broken or damaged beans. Unfortunately, these methods of reducing pressure have not been well researched and are based on field experience primarily with smaller bins.

This chart from NDSU shows how soybean moisture rises with relative humidity and how too much moisture can make for unsafe storage conditions:

This table indicates bean moisture increases as relative humidity rises. It also shows how easily a layer of soybeans can be rewetted to a moisture content that is too high for safe storage (the market moisture content is 13%). 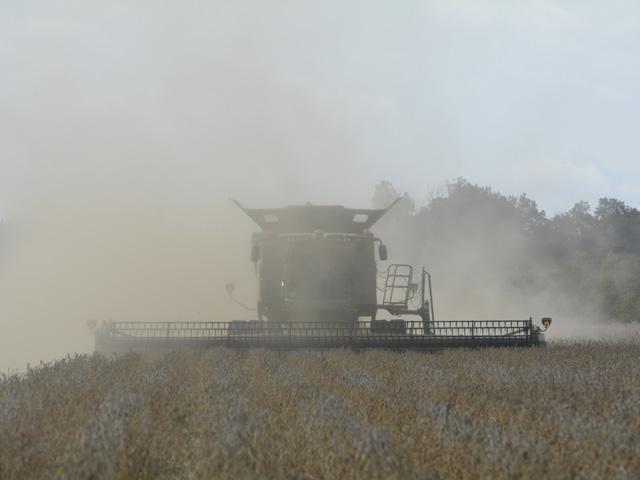