Peas have found purpose in parts of Kansas. Trials by Kansas State University researchers are showing that adding a legume, such as field peas, may help fix nitrogen and possibly reduce synthetic nitrogen use in grass-heavy crop rotations.

"Peas in this area can replace a portion of the fallow period between the last summer grain crop and the next wheat crop," Roozeboom told DTN via email.

Beau Anderson has experienced the rotational benefits of peas on his Williston, North Dakota, farm.

"A decent stand with good root nodulation will typically fix 35 to 50 lb. of N in a growing season. It varies a lot, depending on the year and is not a sure thing. But as growers continue to use pulses in rotation, they should see nitrogen fixation and organic matter slowly increase over time," said Anderson.

Anderson has been growing pulses for about 15 years and said wheat following a pulse crop is typically heavier in test weight and higher in protein because of that extra "free" nitrogen. "We've found that N is not made available in the soil until later in the next growing season," he added.

Analysis of NASS pulse acreage projections as of April can be found in this document from the USA Dry Pea & Lentil Council https://files.constantcontact.com/….

The researchers picked up residual nitrogen two years after pea and soybean harvest ahead of the corn crop (that had followed the wheat crop that followed pea crop). "The same thing applies to soybeans, so peas aren't any different in that regard," he noted. What's different is that soybeans aren't typically an option in the western areas of the state, he explained.

Adding field peas to the rotation could possibly present new market opportunities for Kansans. Roozeboom said so far, most pea plantings have been in northwest Kansas, but researchers are continuing to push boundaries to see how far east the crop can be planted in the state.

Figuring out weed control could be another challenge. Roozeboom said there are several pre-and post-herbicides available -- similar to those labeled for non-GMO soybeans. Peas aren't always competitive early in the growth cycle, but he said the crop makes up for it later. "I would contend that a good stand of peas is very competitive once the canopy closes," he added.

Herbicide carryover is another potential issue. Residual activity of herbicides applied to the preceding crops needs to be considered carefully. Find a discussion about carryover here: https://cropwatch.unl.edu/….

Previous Post (Is Your Love for Corn Hurting Soybean Yields?)
Next Post (Go for the Green: Money) 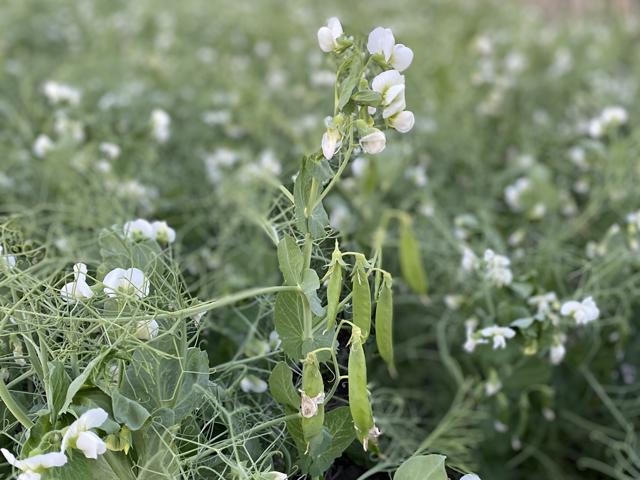