DECATUR, Ill. (DTN) -- It's been a mere month plus a few days since I joined other scouts to tromp through snowdrifts assessing the Kansas hard red winter wheat crop. The images of fully headed wheat lodged and shivering beneath nearly two foot of snow are still stuck in my brain, despite the air conditioners that are now cranking across the Plains.

Wheat combines are now rolling across Texas, Oklahoma and have begun crossing into Kansas over the past few days. We'll soon have more answers on how that Kansas crop endured the freakish storm and everything else that has beset it this year.

According to the June 9 U.S. Wheat Associates report, Texas wheat harvest is 45% complete with central and north-central parts of the state almost completed. Harvest in Oklahoma is reported as 38% complete. The southern third of the state is rapidly winding down with grain delivery points reporting receiving only about 50% of normal volume due to the reduction in harvested acres, according to the release. Central Oklahoma harvest is now in full swing, and harvest is just starting in the far northern parts of the state. Test weights in central and north-central Oklahoma were being reported above 60 pounds per bushel.

Wheat made a few waves in the most recent WASDE report. All-wheat production was estimated at 1.824 billion bushels, up 3.8 million bushels from last month's report.

All-winter wheat yield was estimated at 48.9 bushels per acre, down 6.4 bushels from last year's record yield. Still, if realized, 2017 would be the second-highest yield on record.

Those who waded through the frozen Kansas crop are probably slightly surprised by that 1.25-billion-bushel estimate. We've killed that winter wheat crop over and over during the past month.

Soft red winter wheat may not swing the market, but it's an important rotational crop to Chase Brown, Decatur, Illinois. Harvesting in the southern part of Illinois has already begun, but Brown estimated it would be the later part of June before he opens a field in central Illinois.

Of course the heat wave predicted this weekend could move the harvest calendar up a notch, Brown said. "It might ripen up a little faster if it stays hot and dry," he noted. The weather has made a complete turnaround in his area of Illinois -- a prolonged cool, rainy season messed up timely fungicide applications this spring. But at least it wasn't snow. 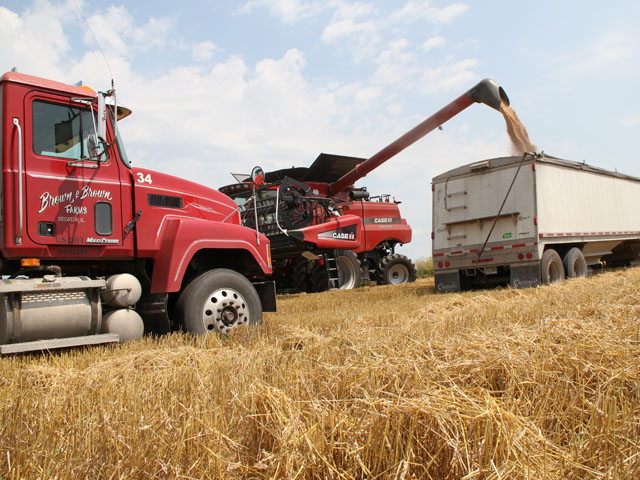