"Basically, we like to be very transparent with landowners," says Bryant, whose family operation handles dozens of landowner relationships on the 13,000 acres they farm near Washington Courthouse. Although some landowners want the security of fixed rents, almost all of Bryant's leases are flex rent--a base cash rent with a bonus depending on yield and price.

During peak corn years, landowners rode those flex rents up. Now Bryant is trying to soften the blow as some of those flex leases follow commodity prices down with a thud. Information sharing is key to the process, he says.

"For the last decade, we've shared actual yield information and profitability per acre to the best of our ability," Bryant says. "We deal with a lot of leases with bonus structures, so my landowners have always known their yields and my average price. In today's world, you have to be very transparent."

Show and tell could be theme for farm operators who need to shave 2017 cash rents, interviews with several Midwest landowners seem to confirm. Unfortunately, transparent cash rent farmers like Bryant may be the exception rather than the rule.

"I want to sit down with my landowners and be honest. This is where I'm at and if you don't want me to make money farming your farm, then we're probably not going to have a long-term relationship anyway," Bryant says. "That's just calling it what it is. Every business deal you ever make has got to be a win-win for both sides. I want my kids to eat and make a living. Those are the kind of people we want to work with."

But drilling down to details wasn't easy when field data had to be manually updated on spreadsheets and costs spread across fields and enterprises. Using real-time management software from Granular, where all work orders are inputted via cell phone and iPads, Bryant can instantaneously show owners what and when was applied to each of their acres, as well as actual yields straight from the combine.

With his real-time records, "we finished one out-of-state owner's farm on a Saturday in September. By Saturday night she had her yield information by email. Monday morning she was calling and already talking about rents," Bryant says. "She understands what's going on the farm marketplace. I can project now what's going to happen on her farm [profitability wise], and how she shook out on the bonus structure."

The bottom line is that faster turnaround in the office at harvest allowed the Bryants to send out that landowner's check the same week as harvest, even though the contract says they don't have to pay until Dec. 31. That's another way to build loyalty.

Dave Hazen manages farm details for his father who is now in his 80s, although he relies on his dad for advice on relationships that date back decades. Still, Hazen would appreciate more openness from tenants who rent the family's land in southeast Iowa and west central Illinois.

Unfortunately, only one of Hazen's six tenants volunteers information like fertility and actual inputs costs. That's despite contract clauses specifying that tenants must report yields, fertility and chemicals applied per field.

"Even with those clauses in cash lease, we still have to go back to the tenants and say they won't be offered a new lease unless we get the information. That irritates me. If someone is trying to do a good job, the best way to show that is to share knowledge, not withhold knowledge," he says.

When they spent about $80,000 to tile 92 acres over a two-year period, they wanted yield reports back so they could recoup some of that extra productivity back in higher rents.

"If we put money into infrastructure, we expect a payback," he says.

Hazen's top cash rents hit a high of $350 in 2014, held firm in 2015 and dipped to $325 in 2016. That's for prime land that is almost a section, averages 225 bpa corn and 70 bpa soybeans, and is well tiled and attractive to seed companies because of its isolation. Farm managers tell him seed contracts are worth an extra $200 an acre, but their tenant has never offered to share higher revenue with them, more than if he was growing commercial corn.

Hazen would consider a flex lease, (although his siblings are reluctant, because it's more unknown for them) but that would require even more two-way sharing of information.

"If you have to repeatedly ask for this information, it doesn't make you too secure about a flex lease," Hazen says.

Overall Hazen's rents have only come down 8%-10% over the past few years, but by the same token, they didn't go up that much in the glory years. Now tenants are asking for more relief, he says. "It's hard to be sympathetic when we have to fight tooth and nail to get information about the farm. It's more stressful for both sides." 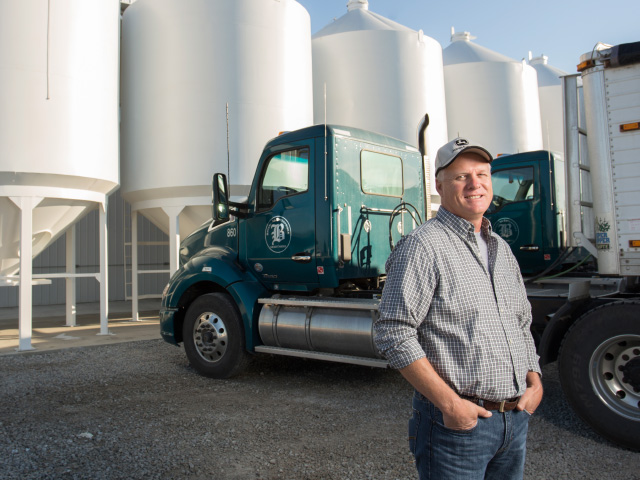