The Lower Mississippi River is turning into a sandbox. Water levels at St. Louis and south have been dropping throughout the summer and, in September, levels became critical, slowing or in some cases stalling the 2022 harvest from getting to the Gulf for export. On top of many safety restrictions hampering shippers, barge freight costs soared to record highs and are continuing to rise for the month of October.

The low water is an issue throughout the entire system due to lack of rain in the entire Midwest and Ohio River Valley. Precipitation in these areas is very important for maintaining sufficient water levels on key rivers, Thomas Russell, Russell Marine Group, told DTN on Oct. 1. "In recent weeks, low water levels, particularly on the Lower Mississippi, have resulted in barge terminals having difficulty loading barges with some barge terminals unable to operate due to low water at docks."

To make matters worse, Russell said some loaded barges were required to off load some cargo because draft restrictions changed by the time the barges were ready to move. Barge draft reductions and tow size reductions have been implemented for weeks and there have been numerous tow groundings resulting in traffic slowdowns and stoppages.

DTN Ag Meteorologist John Baranick said, "In short, we are not seeing anything significant that could bring help to water levels on the three main rivers -- Missouri, Mississippi, or Ohio. We're seeing some smaller systems and even strong cold fronts, but they haven't been bringing much rainfall. Models are pointing to another strong cold front next week which may have a chance at some more widespread moderate rain, but I have a hard time believing it will bring enough to affect river levels on those three rivers."

Baranick added that we would need to see a slower-moving system with widespread moderate to heavy rain to have a large impact on the river system, but "everything we're seeing so far is pretty quick and doesn't put down a lot of precipitation."

In a Sept. 30 press release, The U.S. Army Corps of Engineers, St. Louis District, said it has been monitoring low water levels along the Mississippi River this week.

"In addition to the Dredge Potter, we have the Dredge Jadwin from the Vicksburg District working the lower end of the Mississippi and we are using the Dredge Goetz from the St. Paul District to address the Illinois Waterway," he continued. "The St. Louis District has also utilized the Louisville District's contract Dredge Bill Holman."

Along with actively dredging the river to keep the channel open, their water management office is closely monitoring the current conditions and forecasting future conditions.

"We are currently at -0.7 feet on the St. Louis gage and are preparing the channel for -7.0 feet, although as we experienced in 2012, the fate and transport of sediment gets dicey when below -5.0," said Chief of Water Control Operations Joan Stemler. "The Missouri River cutoff, which usually impacts us in late November or early December, is the next point we are watching," she continued.

The St. Louis District maintains close contact with its counterparts at the U.S. Coast Guard and the river industry and will be closely monitoring this evolving situation.

"As if agricultural shippers did not have enough supply chain challenges to occupy multiple lifetimes, there is current and growing concern related to the diminished water levels along the inland waterway system that will impact barge transportation. Currently, the area of particular concern is the Mississippi River south of St. Louis," said Executive Director Soy Transportation Coalition Mike Steenhoek. "This will become more acute as we increasingly enter harvest season. Due to the scarcity of precipitation throughout the year, the water depth along our navigable waterways is limiting the efficiency of barge transportation in two ways -- channel depth and channel width." Steenhoek explained both:

"Let's assume a soybean-growing region will need to transport 100 million bushels of soybeans via barge. Under normal conditions, 100 million bushels divided by 750,000 bushels per 15 barge tow equals 133 barge tows required. If the water level for loading is decreased by one foot and if you utilize the conservative 150 fewer short tons (5,000 fewer bushels) per load, the 15-barge tow will be loaded with 75,000 fewer bushels. This is the equivalent of removing the entire production of three soybean farms from a single barge tow (500 acres of soybeans per farm times 50 bushels an acre equals 25,000 bushels). Under this scenario, 148 barge tows will be required (100 million divided by 675,000 bushels per 15 barge tow)."

"Barge companies are announcing a maximum of 25 barges south of St. Louis. Since there are no locks and dams located on the Mississippi River south of St. Louis, barge tow sizes are larger since they do not need to transit lock chambers and the size limitations they impose. During drought conditions, the shipping channel becomes narrower, which necessitates reduced tow sizes. Barge tows south of St. Louis can often include 30-40 barges. A reduced maximum to 25 barges is therefore significant."

Russell noted that water levels in New Orleans are hovering around three to four feet and will continue to hold that range during October, and ship and barge movements are currently operating as usual. "However, the slow flow of the river current is allowing a wedge of saltwater from the Gulf to work its way upstream into the river. To prevent the salt water from entering fresh drinking water intakes, the Corp of Engineers will construct a mud berm on the river bottom. This happened in both 1988 and 2012 at mile 64 below New Orleans. Plans for the berm are being finalized. During construction, expect vessel traffic to be restricted to one way. After construction is complete, vessel deep drafts will likely have to be reduced to a number to be the determined draft," said Russell.

"The situation is fluid and approaching unprecedented territory," said Russell. "Expect additional barge draft, tow size restrictions, and ongoing grounding delays. Allow for extra barge transit times. Barge ETA's will be hit or miss until barges are within two days of New Orleans and past the most problematic low water areas." 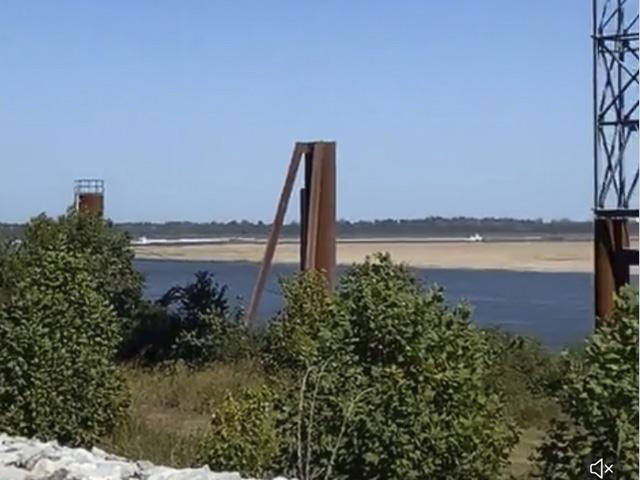