The new crop corn year will begin on Sept. 1 and, as harvest begins, especially in states where the drought has been a factor, early reports are not that great.

The Texas Farm Bureau reported that Central Texas corn yields and quality are down as farmers completed harvesting a crop hit hard by drought and hot, summer temperatures.

"The yields were definitely below normal. I'd say yields were probably 30% less than normal," said Texas corn farmer Aaron Martinka. "We had low bushel weight, low test weight corn with very small kernels caused by the dryness and the heat we had."

Martinka, who farms primarily in Milam County but also grows crops in Bell and Williamson counties, said he averaged about 60 bushels an acre of corn. That's about a third of what he made per acre in 2021, noted TFB.

Now that the corn harvest is completed in the central Texas region, many are baling corn stalks for cattle feed. "You can drive on the roads and just constantly pass trucks pulling trailers full of corn stalk bales, because at this point, that's the only thing left," said Martinka.

A contact in Texas told me that the dairies are paying high prices for corn silage and also offering about a 20-cent discount for "empty" stalks to buy for feed that they won't likely get from their normal ration of corn either due to lack of supply or higher costs.

According to the Daily Dairy Report, sharply lower crop yields and parched pastures are reducing local feed supplies and contributing to a sharp spike in feed costs. For the week ending Aug. 21, USDA rated 49% of the nation's pasture and rangeland in poor or very poor condition, including 84% poor to very poor in Texas. Drought-stressed pastures mean that feeders will have to buy feed and it will likely be costly.

Corn conditions in Colorado, Kansas, Kentucky, Nebraska, Texas, Tennessee, South Dakota and North Carolina were all below the 50% or higher good-to-excellent rating, as of Aug. 21. Besides poor corn stands, some of these states may also have an aflatoxin problem thanks to the hot and dry weather. Prime conditions for aflatoxin happen on warm August nights during a drought. Dairy cattle and young pigs are susceptible to illness from corn infected at 20 parts per billion or higher. Ethanol plants need to test for the toxin to make sure the DDGs aren't infected.

States like Illinois, Indiana, Minnesota, parts of Iowa and South Dakota, Wisconsin and Ohio could be some of the ones that may need to supply states that may not have enough corn to meet the demand in their area. The trick will be the cost to move it farther, especially with rail logistic issues still messy in some areas of the country.

And the states that are expected to see lower yields will likely be pushing basis higher than normal at harvest time, hoping to grab what they can.

On top of lower expected yields, the FSA prevented planting acreage estimates for the U.S., which were reported on Aug. 22, were the third highest in seven years at 6.386 million total acres versus 2.1 million last year. Of that total, corn prevented planting came in at 3.148 million versus 640,000 last year.

As harvest starts there will be pressure on the basis, but that likely won't last when the dust settles and farmers that have a good crop have filled their bins. The tug of war for cash corn will be nonstop in the coming new crop year and farmers should be the winners in the end. 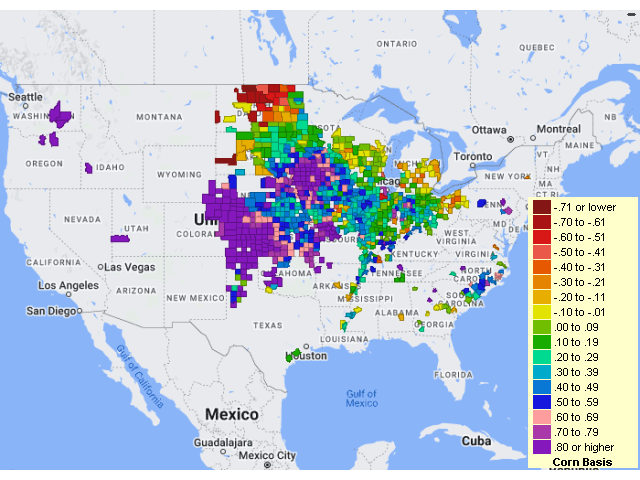