We all know the saying: "There is a first time for everything." That fit me on March 20, when I drove down to Pepin, Wisconsin, and saw the Motor Vessel W. Red Harris pushing nine barges to start the 2022 Upper Mississippi shipping season -- and getting stuck in the ice on Lake Pepin. It was quite a sight.

Every year in the spring, when the first tow pushing barges starts upriver to reach St. Paul, Minnesota, I start tracking to watch its progress. On that Sunday, I tracked it just entering Lake Pepin and then it stopped. A towboat group I follow on Facebook said it was stuck in the ice after entering the lake at the narrow section and then stalled at Pepin, Wisconsin, where the lake widened.

Motor Vehicle (MV) W. Red Harris entered Lock and Dam 10 in the St. Paul District on March 17. As of March 16, the USACE St. Paul reported that after its weekly ice measurements, Lake Pepin still had almost 20 inches of ice in the wide part of the lake and did not declare ice out that day. Tows pushing barges usually can push through ice 12 to 15 inches thick.

Lake Pepin is the last major barrier for vessels reaching the head of the navigation channel in St. Paul, Minnesota. It is the largest lake on the Mississippi River located on the border between Minnesota and Wisconsin and it is the last part of the river to break up ice, because the river is wider and subsequently the current is slower there than it is in at other parts of the Mississippi River.

This year, Lake Pepin was stubborn about letting go of her ice which filled the entire lake. The MV W. Red Harris, which originated from St. Louis, Missouri, likely expected the warmer weather to melt some of that ice by the time it reached there. However, once the vessel broke through the narrow opening to the lake, it got stuck and the barges it was pushing were unable to safely break through the thick ice.

Enter the MV Aubrey B. Harwell Jr. to the rescue! This tow was pushing barges upriver heading to St. Paul behind MV W. Red Harris and Leadman Anthony Belt told me they dropped their loads with the MV Roy E. Claverie, another tow behind then that was heading upriver, and headed up into Lake Pepin to break a path in the ice.

Farther north in Minnesota, we are waiting for the first saltie to reach the Port of Duluth-Superior to open the 2022 grain shipping season there. As of mid-March, ice on Lake Superior increased to about 79% coverage, prompting the U.S. Coast Guard to send two ice cutters to the port to start breaking ice. Between them and Mother Nature deciding when to warm up, all we can do is wait. 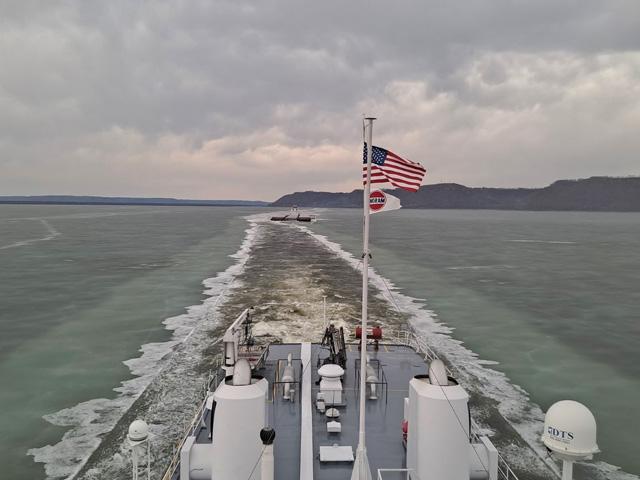