Since the beginning of 2019, parts of the Mississippi River were in flood stage, and as spring approached, the entire river system was flooding. It took over three months for many of those areas to finally fall below flood stage, and at this writing, there are some locations in the Lower Mississippi still trying to get to that point.

Flooding causes sand and silt to be carried throughout the river due to stronger currents and faster movement of the water. This is also known as "shoaling," and the sandbars it can create cause dangerous conditions for barges moving up and down the river through the channels. Unless the sedimentation that settles in the channel area is removed, barges can run aground, as we have seen happen during times when the river is low, and sandbars can be a common sight.

The process of sediment removal is called "dredging" and is performed by a floating plant known as a dredger or dredge. A dredging schedule can be found on each USACE District website. The schedule by equipment includes information about where (by river mile) and what date(s) the dredging will occur. It also includes what depth and estimated quantities will be, where dredged material will be taken, and what piece of dredging equipment will be used.

It is the job of the U.S. Army Corps of Engineers to maintain a 9-foot channel in the navigation pool to allow safe passes for barges moving through the lock-and-dam system in their district. The St. Paul District is responsible for maintaining 243.6 miles of navigation channel to a depth of at least 9 feet on the Mississippi River from Minneapolis at river mile 857.6 to Guttenberg, Iowa, at river mile 614.0, and 40.6 miles on three tributaries: the Minnesota, St. Croix and Black rivers. The district is also responsible for supporting inland navigation by operating 13 locks and dams and by maintaining a 9-foot navigation channel.

The Corps operates those locks and dams on the Mississippi River for navigation, not flood control. The locks and dams create "slack-water pools for navigation during periods of low and moderate level water. For each pool, there is a primary control point, where a predetermined water elevation must be kept for navigation to continue," the Corps noted on their website.

The Corps started dredging in that district in late April, according to their schedule. As of July 23, dredging operations were going on at four locations on the Mississippi River in the St. Paul District.

George Stringham, public affairs for USACE St. Paul, told me in early June that the constant flooding in 2019 will likely keep the Corps dredging in the St. Paul District through the rest of the navigation season.

You may wonder what happens to all of the material that is pulled out of the river by the dredge. The Corps noted on their website that it is placed in designated areas along the river. "Some of these areas are beneficial use placement areas," the Corps noted.

"Beneficial use of dredged material is the productive use of the material by the public or private sectors," the Corps stated on their website. "Examples of common beneficial uses of dredged material in the St. Paul District are upland habitat development, wetland creation, aquatic habitat enhancement, creation of areas for bird nesting, beach nourishment, winter road maintenance, levee repair and improvement, aggregate for concrete, lining fly ash pits, bank protection and general purpose fill."

South of the St. Paul District is the Rock Island District whose waterway navigation system is the second longest of any Corps district, and the number of locks and dams it manages also ranks second within the Corps. The Rock Island District covers more than 78,000 square miles in Iowa, Illinois, Minnesota, Wisconsin and Missouri. The district has responsibility for 314 miles of the Mississippi River and 268 miles of the Illinois Waterway and their tributaries. The Corps in this district has been dredging their navigation channels from the most recent flood since June, according to their schedule on their website.

In a July 22 interview with WQAD in Moline, Illinois, Thomas Heinold, chief of operations for the Army Corp of Engineers Rock Island District, said, "We are on the river every year somewhere dredging, but this is a historic year. We are facing some imminent closures actually, we may have to go into restrictions and request that barges lighten their loads and draft less than 9 feet should we have shoaling in the river that we can't get to in time."

Usually, this dredging process costs the Corps $2 million, but this year, they are paying $10 million, or five times more than normal, noted WQAD.

"We still might not be able to keep up with it all; it's going to be a heck of a year," added Heinold.

Tune in next week for part two of my two-part series of columns on dredging on the U.S. river system when I will talk about non-flood related dredging. 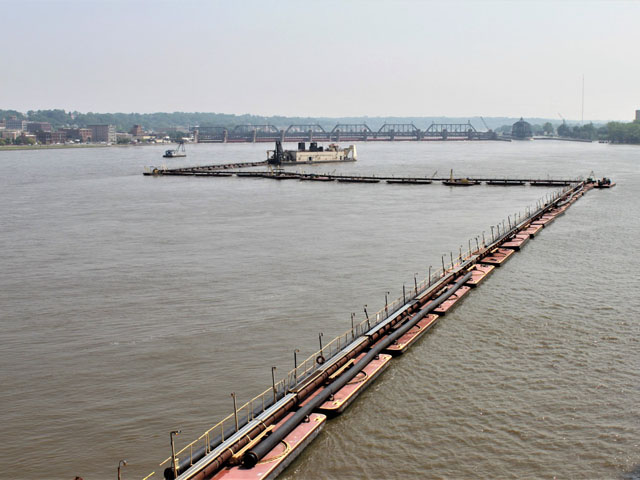