Two months ago, I wrote a story titled "Lack of 2019 Spring Wheat Planting: Time to Push the Panic Button Yet?"

I told farmers and elevator managers who contributed to that story, and a few others, that I would check back with them in May. That didn't happen, because the rain continued and late spring snow halted planting in some areas. I reached out to them to see how planting went and if all of the intended spring wheat acres were put in, and if not, what they planted instead, or were some acres idled?

"Well, it has been a busy spring," said Tim Dufault, Crookston, Minnesota. "Some wheat seeding started in the far north area of North Dakota and Minnesota in late April. But things did not really get going hard until May. Therefore, spring wheat and sugar beets were two to three weeks late in seeding. We have had some heat. Overall, it has been a cool spring so far. This has been great for the wheat -- no stress."

Dufault said that corn was next to go in the ground. "Acres were down a little from last year in the region. Cash prices dropping below $3 in April convinced growers to plant something else. Corn planting was a little later than farmers would like, but not outside a normal Northern Plains planting window. Most soybeans actually were seeded on time in northwestern Minnesota. Southeast North Dakota was wetter, and most of their beans were finished up in June. After the late planting, soybeans and corn are going to need heat units to catch up."

Dufault noted that the soil moisture situation really varies. "Southeast North Dakota has some acres too wet and probably won’t get planted this year with unharvested cornfields still an issue. Northeast North Dakota has been drier all spring and really could use a good soaker. We came into the spring with good moisture in northwest Minnesota and have had just enough rain to keep things growing."

Jeff Mortenson of Kennedy, Minnesota, told me that he planted hard red spring wheat, canola and soybeans. "We were fortunate up here and got everything planted and finished the night of May 21. It started to rain some the next day. I don't think there is much, if any prevented planting up here. Even on the flood ground. We got a needed rain a week or two ago."

Mortenson said it would be nice to have some higher temperatures and timely rains to keep things growing. "Compared to a majority of the United States, we are lucky for once for how our spring went, even though it didn't look that way when it started with the flooding and cold temps."

Keith Brandt, general manager of Plains Grain and Agronomy LLC in Enderlin, North Dakota, said spring wheat acres are down 10% to 12% from what farmers had intended to plant. "There is a big range in planting dates of April 23 to June 11. Because of the cool and damp conditions, wheat planted by mid-May looks very good and has decent potential. The balance will be 10 to 15 bushels-per-acre less on yield."

"Feeling pretty fortunate compared to northern North Dakota where they are dry and squeaking by," said Mark Rohrich, Rohrich Farms, Ashley, North Dakota. "South of us, there are a lot of places with just rain and more rain. We got a whole lot of crop in and when guys were thinking about patching in some areas, rain comes back around."

I asked Rohrich how his spring wheat was doing and he said it was "decent," but some got in late. "Driving rain made soil like concrete. Could be a better stand; the late after rain stuff in the area has nice stands, but that was seeded end of May, early June. Mine was all in earlier. We are lucky to get as far as we have."

Allan Klain of Turtle Lake, North Dakota, told me "seeding went really well. We started on wheat April 18 and finished May 8. We had good moisture and little shots of moisture have the crop looking good. We are not overly flush with moisture and could use some. Rain is in the forecast and we welcome it."

Klain said that, "Corn had a hard time getting out of the ground due to cold soil and there is a fair amount of cold inhibition stand loss in corn. All in all, we had a pretty easy planting season. There were minor fertilizer supply issues during the first part of May, but we got through it."

"The planting season turned out okay for those in our area, although to the east was somewhat of a disaster," said Tregg Cronin of Gettysburg, South Dakota. "On our farm, we were able to seed most of intentions with about 20% of our corn area ending up as prevent plant. Our soybean and sunflower acres were all able to be seeded, however."

Cronin said emerged crops look good after rain moved through his area during the last week. "Maturity is the concern with everything about two to three weeks behind, but we feel pretty good about prospects so far.

"Our winter wheat is going through flowering right now with strong prospects expected. Our spring wheat should be heading out in about 10 to 14 days and prospects there look solid. We are expecting above average yields on both spring and winter wheat. A long fall will be needed for our row crops to reach full maturity, but it is a long way off to be worrying about frosts or wet crops that won’t dry down," concluded Cronin.

Matthew Morog, merchandising manager at CHS Midwest Cooperative in west-central South Dakota said, "I don’t think we planted the intended spring wheat acres, but definitely not at the low end of the estimates. The wheat crop overall in the Onida-Pierre area looks very good, but honestly it could use a little shot of rain if we want to get those high-end yield estimates. Guys have been able to do a fair amount of fieldwork to keep wheat in condition, but there are areas that have been too wet to simply keep weeds down. Harvest will be about two weeks later than the norm for both spring and winter wheat."

"We maybe had 15% of the intended spring wheat acres planted in our area," said Todd Yeaton, shuttle facility manager in Kimball, South Dakota. "For corn, likely 60% of intended acres have been planted and 70% of soybean intended acres. The rest will be prevent plant on mainly last year corn ground and no-till farmers due to the stalks still terribly wet. Crops that were planted could use rain, as ground is hard."

Ryan Wagner, Roslyn, South Dakota said, "Compared to some of the disaster stories I am hearing out there, we got very lucky this spring. We started seeding spring wheat April 24 and were able to work off and on between rain events and finished up on May 10, getting 95% of our intended spring wheat acres in."

Wagner said they were able to start planting corn on May 4 and got a few days in before they got rained out. "We then had a nice open window May 10 through May 17 when we were able to get the majority of the rest of the corn done. Rain then kept us out of the field for a good two weeks, and we were finally able to finish up the last whole field of corn on May 30 and continued to patch in wet spots until June 3.

"We were able to get some soybeans planted before the rains came in late May, but the majority of our soybeans were planted the first week of June. We wrapped up soybean planting for the most part on June 8 and finished completely filling in wet spots on June 13. It has also been a struggle to find days suitable for spraying, but we did manage to get a burndown and pre-emergent on everything and have sprayed the first pass post-emergent in wheat and are now working on spraying corn, so we are basically caught up there."

Tim Luken, manager at Oahe Grain, Onida, South Dakota, reminded me that two years ago they had a severe drought in his area, last year they had two serious hail events, and this year have had the wettest spring ever and there is still water standing around.

Luken said that in the area around him he estimated 70% of the spring wheat did get in but it will be late. "Normally, spring wheat is jointing by now, and that is at least a good week to 10 days off. Winter wheat is just starting to head out, which is two weeks later than normal. Needless to say, rather than harvest starting normal around July 10, it will likely be the end of July and that is the latest I have ever seen around here.

"Corn was being planted up to June 10 around here and then farmers gave up the ghost and starting either planting beans or sunflowers." Luken said that in his area, he expects to see 10% to 12% of acres getting enrolled in prevented planting.

"Last year, corn was waist high by July 4 and this year we hope it's ankle high by the Fourth of July," said Luken. "It will be interesting if Mother Nature gives us some well needed time on the back end for the row crops. If it doesn't, it could make for a very interesting fall."

So, what is next for the spring wheat and other crops, especially the ones that were planted late? Bryce Anderson, DTN Senior Ag Meterologist, wrote a weather blog on June 21, noting that, "Scientists with the National Oceanic and Atmospheric Administration (NOAA) and the USDA Midwest Climate Hub are worried about how summer 2019 conditions will treat crops that are already behind the development time curve because of wet and cool weather.

Here is a link to the entire blog: https://www.dtnpf.com/… 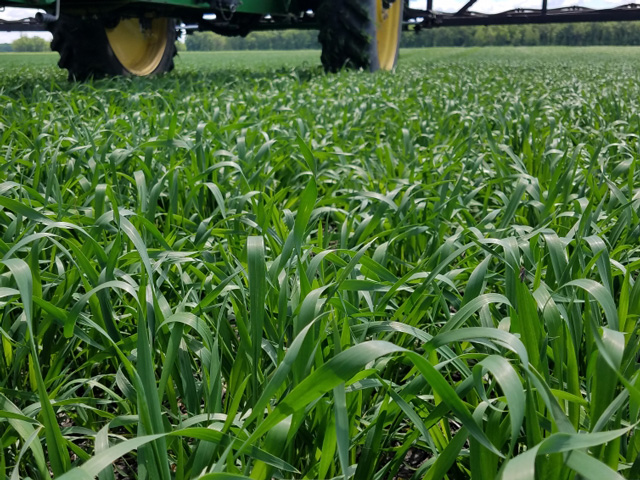