In the northern tier of the Upper Mississippi River (UMR), the 2018 shipping season opened on April 11, 2018, the latest start to the shipping season in the UMR not related to flooding. The season ended Dec. 1 2018 as the last tow passed through Lock and Dam 10, located on Mississippi River mile 615.0 near Guttenberg, Iowa. Lock and Dam 10 was constructed and placed in operation November 1937. The northern section of the UMR starts in St. Paul, Minnesota, and runs downriver through Guttenberg.

The last stop on the UMR controlled by the St. Paul District U.S. Army Corps of Engineers (USACE) is Lock and Dam 10. The St. Paul District maintains a 9-foot navigation channel from Minneapolis to Guttenberg. "Keeping this system open is vital to the nation's economy," said the Corps.

The USACE St. Paul District said in its 2018 shipping report that navigation statistics fluctuate from year to year, depending on the weather, river flows and the length of the navigation season.

A wide range of bulk commercial products, or commodities, travels up and down the Mississippi River, according to the National Park Service (NPS), Minnesota region. Grain accounts for the majority of down-bound tonnage. Eight million tons of Minnesota's corn, soybeans and wheat is shipped annually by barge to New Orleans for export to destinations around the world. Liquid asphalt for roads and roofing is shipped down-river from Twin Cities oil refineries. Canadian potash is transferred from rail to barge and carried to locations where it is distributed for use as fertilizer. Other down-bound commodities include petroleum coke for power generation, scrap metal for reprocessing, petroleum oil, sunflower oil, DDGS, molasses and fly ash, NPS noted.

The NPS also noted that principal up-bound commodities in the Twin Cities are led by sand and gravel used in construction and road building. Fertilizer arrives from Florida for application in agriculture and lawn care. Salt from Louisiana is used on roads and in water softeners. Cement for construction is shipped upstream from Iowa. Other bulk commodities carried upriver include slag (used in asphalt shingles), coal, caustic soda (used in industrial and food processes), light oil, liquid ammonia, molasses, steel, pipe and twine.

While the final statistics for the entire river system are not available yet due to the government shutdown, the USDA weekly Grain Transportation Report gave an update in their Dec. 13 report. USDA said that as of Dec. 8, calendar year-to-date (YTD) grain barge tonnages through the locking portions of the Mississippi, Ohio, and Arkansas rivers, were 35.8 million tons, 5% below the three-year average and 8% lower than 2017.

"For most of 2018, calendar YTD corn barge shipments were 22 million tons, up 6% compared to the three-year average. However, the additional corn tonnages were not enough to offset a 17% decline in YTD soybean shipments (12 million tons). Reduced soybean sales to China have contributed to the decrease in soybean barge shipments," noted the USDA.

"Barge operators reported 2018 as being one of the more challenging years for navigation in many years," said the USDA. "Flooding and lock repairs throughout the year caused less than ideal navigation conditions, which resulted in increased transit times." Barge rates were above average for most of the year, reflecting higher operating costs due to navigation conditions.

SLOW START TO 2019 FOR BARGE TRAFFIC

So far, 2019 has not started out well for barge operations on most of the river system that remains open during the winter. High water on the Lower Mississippi River (LMR) has slowed barge traffic since December and safety restrictions have been in place on and off. Those ranged from daylight-only-hours transit at certain portions of the LMR and/or reduced tow sizes, usually by at least one string of five barges.

Icing has plagued the Illinois River and last week barge lines ceased operations. Icing in the St. Louis Harbor also caused slowdowns the past week and will continue to do so as it flushes through the system. However, conditions were expected to begin improving over the weekend with warmer temperatures and rain expected through the middle of the upcoming week, before the return to colder weather.

Tom Russell, Russell Marine Group, told DTN recently that the fall on LMR has been slow and rains mid-January in the Ohio River Valley put areas of the Ohio River near flood stage. "That water will likely keep the LMR charged throughout February," said Russell.

The New Orleans and Baton Rouge harbors experienced extended periods of fog during late December and early January, noted Russell. Barge lines noted that higher temperatures moving in over the weekend into the first half of next week will create fog delays once again.

"Water levels in the harbor are still on a slow rise and will be near flood stage," said Russell. "The fast-moving rising river drops a lot of sand/silt, which caused vessel groundings and closed the river to traffic from time to time in early January. Safety protocols, which slow barge and vessel traffic, have been in place since December. The fast-moving river caused barge breakaways in fleets throughout the harbor. Heavy sand/silt buildups also created problems with ships heaving and or popping anchor chains. High water also forced the closure of some midstream terminals temporarily."

High-water protocols are expected to be in place throughout the month of February for the New Orleans and Baton Rouge harbors. Russell noted that weather and high water will be a problem for logistics from the Midwest to the New Orleans/Baton Rouge harbors "at least" throughout the entire month of February. "Plan for and expect delays, slowdowns and stoppages," said Russell. 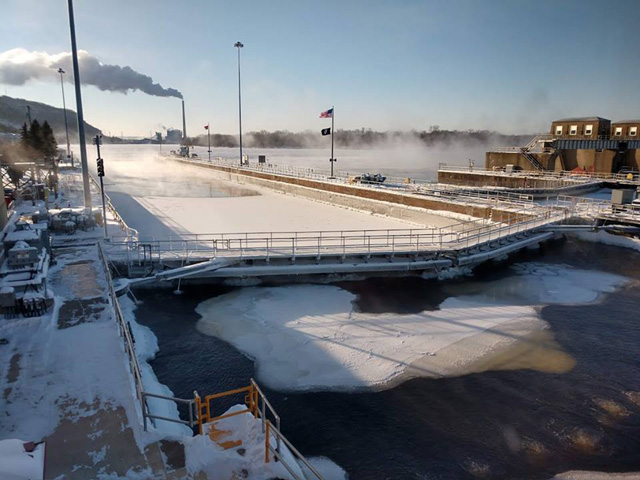