You've likely seen the TV commercials featuring the cute, pink toy rabbit, wearing sunglasses and blue- and black-striped sandals forever beating a bass drum. He is the Energizer Bunny and is the mascot for Energizer batteries, which the company claims keep going and going and going. He could also be the mascot for harvest 2018.

One month ago, I wrote a column about farmers in the Midwest who endured late planting due to April snows, record-setting rainfall in early summer, hailstorms, and then rain and snow delaying harvest through the entire fall. It's been a tough year for farmers in nearly all corners of the Midwest. Loss of crop yield and quality downgrades have cut into an already slim bottom line for farmers this year.

I checked in with some of those farmers I had spoken to in early October to see how their harvest was coming along now and what their quality looked like.

"We finished up two weeks ago right before we received an inch and a half of rain," said Dave Newby of Bondurant, Iowa. "It was a struggle with breakdowns. Corn yield was our best ever at a 227-bushel (bu) average despite tornado and flood damage; easily our best corn crop despite about 7% damage from a EF-2 July tornado and some flooding issues. Soybeans made 63 bu despite 3 bu to 4 bu shatter loss. Quality was good enough to avoid a big dock with just 2% to 3% damage. We feel fortunate to have narrowly avoided a bigger problem." Newby said now the main concern is having enough good days to finish the tillage, which is only about 20% done.

Andy Weisser of Roscoe, South Dakota, said he finished up harvest on Nov. 2, and it was pretty much what he expected.

"(The) main thing is it's not how much rain we got, but when we got it," Weisser said. "Yields improved 20 miles north and west of our farm (we don't have any land in those areas.) Our corn averaged 101 bushels per acre (bpa), which is 30 bpa to 40 bpa below average. The stalk health was poor, and I learned a lot about changes I could do to improve if next year is dry like this. Our soybeans averaged 30 bpa, which was 5 bpa to 10 bpa off average."

Weisser added, "Soil health history showed! We are on two tough, dry years in a row, so I hope 2019 will give us a break. I guess this job isn't supposed to be easy!"

Ryan Wagner of Wagner Farms near Roslyn, South Dakota, told me on Friday, Nov. 16: "We are still working on corn here and have about a good week left. It's been stop and go with the cold and snow, so it's hard to say at this point if a week's worth of work will take a week or a month. Corn yields have been very good outside of the hailed stuff with moisture still in that 18% to 20% range. We finished up soybeans in that open window in late October with good yields, but slightly disappointing relative to phenomenal corn yields we have been seeing.

"I don't remember a year where there has been this little of fall fieldwork completed. The first half of October was rainy, and we only had about a two- to three-week window for tillage and fall fertilizer application. Then, the cold and snow shut things down. We only got about half of the fall fertilizer applied that we wanted to, and it looks like we are probably done for the season unless we get a week of warm weather after Thanksgiving."

Wagner noted that the quality of some of the soybeans that sat through the snow and rain is a little bit suspect, but not too bad. "Yesterday (Thursday) and the first part of today (Friday) have been very nice. Sounds like some rain/snow moving in later this afternoon and more snow again tomorrow afternoon, then a high of 26 (degrees Fahrenheit) Saturday."

Mike Carlson of Red Oak, Iowa, told me on Saturday, Nov. 17: "This nightmare harvest continues on for me. We are not done yet. Got about three days left. Should get done Monday with any luck, but there hasn't been much of that this fall. It's been a challenging harvest. Lots of mud and wet spots to deal with. We've been stuck so many times that I lost track. We've had to deal with snow twice. Like I figured, there are spots we couldn't get harvested because it's too wet. It's been really cold lately, too, so we had to get winter fuel in things also.

"I had the worst bean crop since the dry year of 2012. They were the best-looking crummy beans I've ever seen. To look at them, they looked great, but the beans were very tiny and poor quality. We also got docked on a small portion of our beans for damage because of all the rain and snow.

The corn crop is very good, however. I would guess at this point it will be one of my best corn crops. I don't really get how the corn can be so good and the beans so bad."

Carlson said he can't wait for this harvest to be over. He told me on Sunday that they just had their third snow event of harvest. "They had taken all the snow out of the forecast on Friday, and we get 3 inches of snow on Saturday. Just unbelievable. I hope I never see another harvest like this. It's been just awful."

Dennis Bogaards of Pella, Iowa, said they finished harvest Tuesday, Nov. 13. "We did have yield loss in our beans between 5 bpa and 10 bpa," Bogaards said. "Damage in the beans was between 5% and 40%, depending on the variety. This was a new problem for us. I have never seen damaged beans out of the field. It will cause concerns for storage, and I really wonder about seed quality for next year's seed we will be planting. Corn had some damage, but very minor compared to the beans. We had to be very careful of where we combined and tried to keep wagons and grain carts out of the field as they tend to get stuck before the combine and do a lot of compaction."

I asked Bogaards if insurance would cover any of the quality loss.

"Insurance? Yes and no," Bogaards said. "Insurance covers damage starting at 8%; most of my beans were 5% to 10% damage, and we had one field that was the worst at an average of 30% damage. The way my insurance works is that we average it together, and I had enough beans that were less than 8% to average the bad beans out. So, it will cause some headaches to blend good beans with bad beans on the truck but should be able to get them down to less than 10% damage.

"Others that insure fields separately would be able to get insurance help. But, they also pay way more in premiums too. This problem is much more common in the Southern U.S.; we just don't normally get that much rain in the fall and then two weeks of cloudy, damp conditions. I think if we had gotten some sun to help dry the plants out, it would not have been an issue. Even with that much rain."

Besides the weather delays in the Midwest, Southern states also saw weather issues that not only delayed their harvest, but also caused some serious quality issues that have created havoc for shippers.

In late October, reports surfaced of barges originating from West Memphis, Arkansas and south being rejected at the Gulf due to heavy damage. Significant discounts, on top of already heavy discounts for poor quality, were put in place, and if the beans were bad enough, they were rejected. Some of the rejected barges were reported to have been sent farther north in hopes there would be better-quality beans available to blend off the poor beans.

River Gulf Grain, a division of Agrex Inc. located in Bettendorf, Iowa, posted this on their website: "Effective 10/18, we must reject any soybean loads over 5% damage. There is no market for off-grade barges in the Gulf, and there are not enough good beans locally or in the Gulf to blend out."

Mike Andrews, Randolph County, Arkansas, said: "Rain slowed harvest last week with only a few fields of soybeans harvested. We need dry weather to be able to dig remaining peanuts that are in the ground and to get those that are dug harvested. There is concern about quality of peanuts going down due to freezing temperatures."

Another troublesome result of the unfinished fall harvest in the Southern U.S. has been a delay to winter wheat planting. Mississippi State University Lowndes County Extension agent Reid Nevins anticipates wheat acreage will go down this year there, because two weeks of rain in late October and early November prevented the last of the harvest and wheat planting.

As of Nov. 11, U.S. winter wheat planting was at 89%, more than one week behind the 94% average. States furthest behind normal were Arkansas and California at around 15 percentage points behind average, followed by Oklahoma, North Carolina and Kansas at around 10 percentage points behind average. It's like a double whammy to farmers who may not get their fall wheat crop planted because of the delay to their fall crops harvest. Many counties in some of the states mentioned are already past their insurance last plant date.

Harvest 2018 has been miserable, to say the least, for many farmers, and for some farmers throughout the U.S., it's still not over. A.J. Worden a farmer from Burlington, Colorado, described it perfectly: "If harvest '18 was a softball tournament, we'd be in the championship game, top of inning number 41." 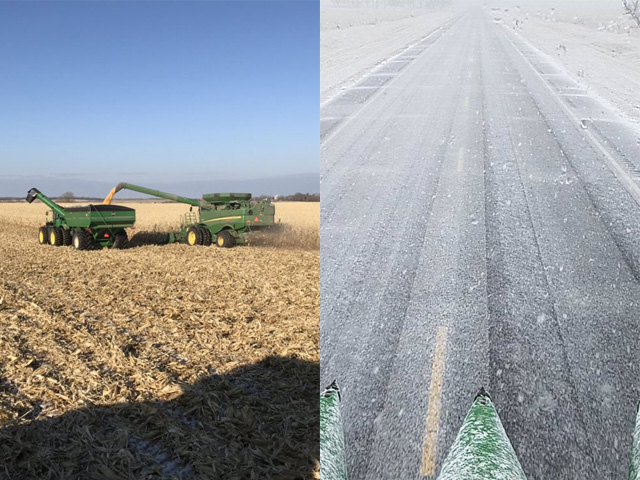