Even though it was three months ago that a state of emergency was announced because of weather challenges in Minnesota, conditions haven't changed much as of Oct. 1 and are stalling harvest.

"Some sections of southwest and southcentral Minnesota and northwest Wisconsin have picked up three times the average amount of moisture in the last 30 days, with southern Minnesota receiving up to three months' worth of rain in that timeframe," noted Minneapolis-St. Paul meteorologist Paul Douglas back on June 26.

Strong storms, including 10 tornadoes, moved through southern Minnesota on Sept. 20, destroying some farms and crops along the way. On Sept. 21, the storms continued with wind gusts of 70 miles per hour reported in Mankato and 63 mph in Red Wing, with other areas reporting gust above 40 mph, according to the National Weather Service.

In a news column from the University of Minnesota (U of MN) Extension, Claire LaCanne, Agriculture Extension Educator in Rice and Steele Counties reported recent storm damage in those counties. "The National Weather Service (NWS) reports 10 tornadoes struck parts of southeastern Minnesota on Sept. 20 and that preliminary information indicates Rice County was hit by six tornadoes. The storm zone included Waseca, Owatonna, Faribault, Northfield, and Cannon Falls, plus surrounding towns.

"Soybeans are leaning, but look okay in general. They are lodged but holding onto their pods. Sweet corn in affected areas was completely lodged and lying on the ground. Field corn in the most severely impacted areas was mostly busted over, with ears hanging close to the ground."

According to Shane Bugeja, agriculture extension educator in Blue Earth and Le Sueur Counties, "Corn damage included breaking of stalks above the ear (20% to 30% of fields observed), with one field near Morristown flattened. Wet, low-lying spots also had completely downed corn. Likely this was due to a combination of restricted root growth, pathogens, and internal weakening from translocation. Soybeans were relatively unscathed, but had a noticeable lean to them."

Liz Stahl from the U of MN Regional Extension Office in Worthington, Minnesota, told DTN by email Sept. 28 that, "I do not have a good feel for how big the area was where corn and soybeans were blown down. That is another story as yield impacts could be significant, depending on if the crop is flattened and not able to be harvested, or if it is just lodged and they can still combine it."

Stahl noted that the recent rains did not really affect yield in most of southwest Minnesota and much of south central Minnesota, since areas where water ponded had already drowned out earlier in the year. "If wet conditions persist and people can't get into the fields before we have a lot of downed corn or pod shatter in soybeans that is another story. But fortunately we haven't had much rain recently, and hopefully the weather will cooperate so harvest can continue. I did see some corn getting combined this morning, so that is a good sign."

Here is the link to a blog posted on Sept. 26 by the U of MN Extension about harvest considerations for storm-damaged corn and soybean: http://blog-crop-news.extension.umn.edu/…

I spoke with some farmers that I had talked to in July when their fields were inundated with rain, wondering how things look now after the recent onslaught of storms.

Jerry Demmer, a corn and soybean farmer from Clarks Grove, Minnesota, said, "There has been very few fields of beans harvested in our area; there are beans that are ready, but the sun needs to stay out for field drying in order for the beans to be delivered to the elevator or for bin storage. While that was not my picture, there are pockets in the fields here that have standing water waiting for the system to catch up from the last 5-inch rain event. So far, there is no quality or yield concerns for either crop, but as we continue to have wetter conditions, and the later we get, the concern is for stalk quality in corn and the potential for wind damage."

Chad Schmidt, of Alden, Minnesota, told me on Sept. 27 that, "There are a couple neighbors starting harvest this afternoon. A couple more will try tomorrow if rain stays away. Most beans need another week to mature and dry. Still water standing in a few spots. Some corn got hit pretty hard from high winds with the storm we had last week. Guessing if beans won't go next week or in the next 10 days, we will see corn harvest start on those fields. Lodged corn appears to be the worst of the problems right now."

When I spoke with Lyn Wessel who farms in Watonwan County, Minnesota, at the end of June after heavy rains hit, he named his area the "I-90 corridor mega swamp." He told me this past week that they had started on soybeans, but his corn has large areas drowned out or is "just crap." Wessell said that there is a lot of corn in the area going down. Stalks were cannibalized because they ran out of nitrogen in July and it was too muddy to apply more even if he wanted to do it. (In response to stress, corn plants will mobilize sugars to fill the kernels, resulting in reduced sugar content of stalks. This process is referred to as stalk cannibalization.)

"My neighbor combined 140 acres of a 240-acre corn field, tore it up pretty bad and quit," said Wessel, adding that he hoped he can do the soybeans until it rains.

"There is a corn crop out there," said Wessel. He said it is impossible to estimate his yields, but gave me this estimate. "Best field actual production history yield (APH) 220 bushel per acre (bpa) maybe make 170? (Corn) broke off pretty bad already, so how much harvest loss? Worst field APH 208 bpa maybe 70 bpa? Eighty-four acres, about 30 will be zero, another 30 won't make 100 bpa.

"Watonwan County average last year was 218 bpa. Whole farm yields of 240 bpa common on good ground, best areas of fields were 285. This year maybe 160 bpa county average? You tell me how NASS can estimate this mess any better than you or I can. So, total disaster? No. Financial disaster? Yes. A consistent high yielding area, with very high land rents; profit was gone before we got the crop in the ground." Wessel is referring to the fact that the crop was put in late and was way behind. He told me at the end of June that, "We have had big rains over and over and over again for two months. I've had 19 inches of rain since mid-April and you'd be hard pressed to find anyone in a 50-mile radius who has had less."

Wessel added, "I've always said if southern Minnesota and northern Iowa was one state we'd average just as good of corn as Illinois; but not this year."

Corn or soybeans that have been damaged or drowned out will be devastating to farmer's bottom line, as mentioned earlier by Wessel. Besides yield losses, damage discounts for mold or other weather-related issues will cause additional monetary losses to the farmer. For soybeans, shattering will cause yield losses. Shattering, the splitting of pods and loss of seeds, occurs in mature beans and increases with repeated cycles of wetting and drying. Prolonged wetting due to submersion may amplify shattering losses.

"Most farmers I know have drowned out spots this year, and for some, the amount is significant. This will drive down average yield (as well as total yield) from the field," said Stahl. "As far as the "tariff relief" payments, I understand that is based on what you produce this year too, so growers would not see anything from these payments where they were not able to produce a crop."

I asked Keith Newman Grain Department Manager for New Vision Co-op in Brewster, Minnesota, what he was seeing in his draw area as far as damage and crop losses. He told me that, "With the recent storms in the past couple weeks we are seeing a lot of lodging in the corn. We are not seeing much sprouting, but are seeing some mold in corn that had been hailed on in the last month. Any additional heavy wind will cause more damage to the corn. We have some producers combining corn right now instead of beans because of the potential damage to corn if we have any heavy winds. I'm estimating that 1% to 2% of the crop has been zeroed out."

As for soybeans, he told me that harvest has gotten off to a slow start. Newman estimated about 6% of beans have been harvested and less than 1% of corn. "The quality of bean is OK, and most beans being harvested right now are wet, between 13% and 16% moisture because weather conditions have not given beans the opportunity to dry down. Bean yields will vary from 40 bpa to 65 bpa, down 10% to 15% from a year ago."

I asked him if damage or other discounts may change if a lot of the new crop hauled to the elevator has significant damage or is too wet, and he told me that, "New Vision's discounts are always subject to change and could potentially change if we start to see more damage to crops."

Sadly, farmers who experience losses due to the poor 2018 growing season, will see another lost year of profits. In a March 27 news release, U of MN Extension reported that Minnesota farm income took another dip in 2017. "For the third consecutive year, Minnesota farmers produced bumper crops of Minnesota's primary cash crops, corn and soybeans. But, as has been the case each year, high yields did not produce high profits. The median crop farm earned $23,722, down from $46,831 in 2016."

The news release also noted that "crop farmers are a little more optimistic about this next year (2018 crop)." Apparently, Mother Nature didn't get the message. 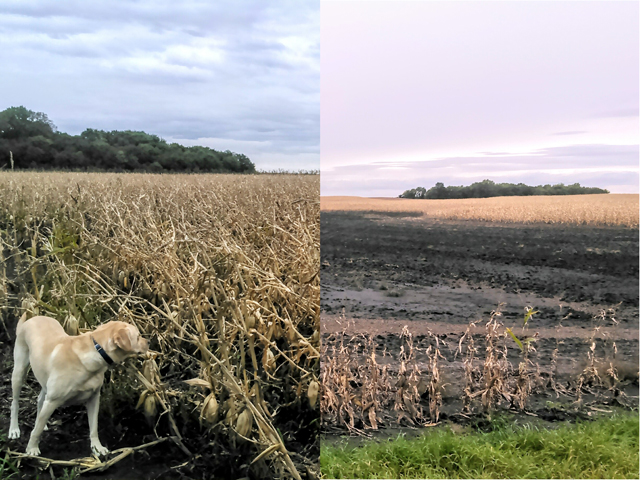