While the Illinois and Mississippi rivers have been rising in recent weeks, the Minnesota Department of Natural Resources (DNR) has reported that 12 rivers in the state are at very high levels across southern Minnesota. Rain in that area has been relentless, flooding farm fields and rivers in Blue Earth, Cottonwood, Crow, LeSueur and other counties in that part of the state.

The National Weather Service in Chanhassen, Minnesota, noted that from 8 to 14 inches of rain has fallen in much of southwestern and south-central Minnesota in the past two weeks. On Saturday and into Sunday, some of those same areas received scattered thunderstorms while heavy rains covered much of Iowa with 3 to 10 inches reported over the state.

Here is a link to the DNR river level site, which lists the current level of all the rivers in Minnesota: https://www.dnr.state.mn.us/…

Some elevators along the river have been scrambling to load barges, because when water levels get too high, barges can't fit under loading spouts. Another headache for loading elevators is that tows become restricted as to how many barges they can push when the water gets too high and is near or in flood stage.

In its weekly Grain Transportation Report, USDA noted that the return to high water will likely stall the recent surge in grain barge shipments. For the week ending June 21, grain barge tonnages on the locking portions of the Mississippi, Ohio, and Arkansas rivers were 1.1 million tons, continuing a three-week trend of tonnages exceeding 1 million tons per week.

"The recent surge has occurred as operating conditions have improved on most segments of the system, along with an increased demand for export corn. However, high water conditions are reoccurring on some parts of the Upper Mississippi and Illinois rivers, which might disrupt grain shipments," said USDA. Year-to-date tonnages have been about 8% lower than last year and 1% lower than the three-year average for the comparable time period.

As summer moves along, work on various locks and dams along the river system will slow traffic as well. At MM 811 on the Lower Mississippi River, ACBL has reported that contractors expect to be back to work on weir dike construction July 2 to July 3, and daily river closures will resume at this time. This closure will be for 12 hours each day, seven days a week and is expected to last 35 calendar days. This will be a full river closure during work hours; boats will only transit at night through this area.

At Thebes, Illinois, near MM 38-46, rock removal has been ongoing but is always discontinued when water levels become too high. When levels drop and rock removal resumes, boat traffic is stopped during the daylight hours when work is in progress. Rock pinnacles need to be removed from the river bottom in an effort to keep the waterway at 9 feet deep in that stretch of the river to maintain a channel for barges to pass.

As the U.S. river system continues to age, repairs have become common, and at times, may stop barge traffic for days, depending on how much work needs to be done. Eventually, it is possible that some of the aging locks and dams may be beyond repair and will need to be replaced, which could stall traffic for weeks. 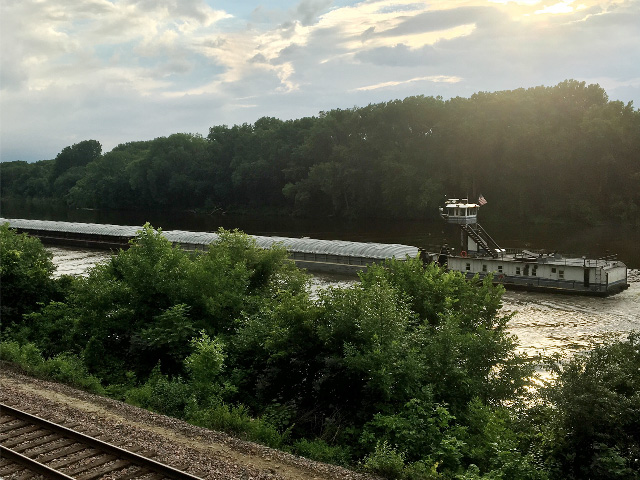