Spring has yet to arrive in Minnesota. This past weekend, Minnesota broke a snowfall record for April, with over 13 to 25 inches falling from the Twin Cities to the southern part of the state. Minnesota farmers have yet to get in their fields, meaning they have planted zero crops. The Minnesota Twins canceled four of their first 10 home games because of snow, Minnesota High Schools have shortened their spring sports seasons and not a single one of Minnesota's 10,000 Lakes have yet to declare "ice out."

Finally, on April 11, after cutting through ice on Lake Pepin, the Motor Vessel Michael Poindexter, pushing 12 barges, locked through Lock and Dam 2, near Hastings, Minnesota, on its way to St. Paul. The St. Paul District maintains a 9-foot navigation channel and operates 12 locks and dams to support navigation from Minneapolis to Guttenberg, Iowa.

This was the latest start to the shipping season in the UMR not related to flooding. The USACE noted that the earliest date for an up-bound tow to reach Lock and Dam 2 was March 4 in 1983, 1984 and 2000. The average start date of the navigation season is March 22. The latest arrival date unrelated to flooding was April 8, 2013. Historic flooding in 2001 delayed the arrival of the first tow until May 11.

Farther north, up in Duluth, the first saltie (oceangoing ship) of the 2018 commercial navigation season, the Federal Weser, arrived in the Port of Duluth-Superior late on on April 12. Here is a video of the ship arriving in the dark, heading under the Duluth aerial lift bridge: https://www.youtube.com/….

According to a press release by the Duluth Port Authority, the Federal Weser was expected to start loading 21,400 metric tons of durum wheat bound for Algeria April 16 in the morning at the CHS terminal on the Superior side of the harbor. If all goes according to plan, departure could be late April 17 or April 18.

"Some of the world's highest-quality grains move from farmers' fields in Minnesota and North Dakota through the Port of Duluth-Superior to customers in countries across Europe, North Africa and points beyond," said Kate Ferguson, director of business development for the Duluth Seaway Port Authority. "When it comes to shipping everything from agricultural products and iron ore to heavy equipment and project cargoes, the Port of Duluth-Superior literally links the heartland of North America to the world."

The Federal Weser is the first of a half-dozen salties that will make their way to the Twin Ports via the Great Lakes St. Lawrence Seaway System during the next couple of weeks.

Meanwhile, as Minnesota digs out of another weekend snowstorm, those of us who live here have concluded that our official seasons of 2018 are: winter, summer, fall, winter. Spring will not make an appearance this year. 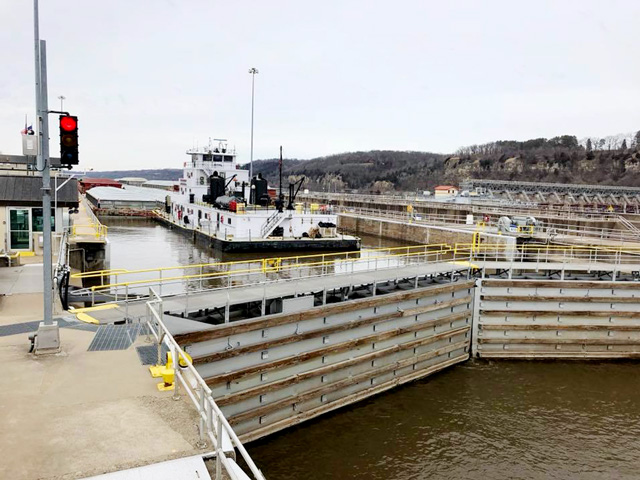