The report noted that production was down 21% from 2016 due to lower planted area, and severe drought conditions across the western portion of the main four-state production region. The impact from drought offset production gains in the Pacific Northwest and eastern half of the four-state growing region, where a more favorable growing season produced above-average to record yields.

The spring wheat crop averaged a No. 1 Northern Spring protein compared to a No. 1 Dark Northern Spring (the preferred flavor of top exporters) a year ago, as average vitreous kernel levels fell from 77% to 71%. Protein averaged 14.5%, which was higher than the five-year average. Drought conditions and above-average temperatures led to the higher protein, with the most notable gains in protein in drought-affected areas, noted the report.

I spoke to shippers and farmers in the key growing areas of Montana and North Dakota, as well as western Minnesota and South Dakota. With the severity of the drought varied in all of the growing areas, results were mixed.

Perhaps the hardest-hit area of the spring wheat growing states was Montana. Todd LaPlant, elevator manager at EGT LLC in Glasgow, Montana, told me, "We estimate yield for northeast Montana spring wheat at 17 bushels per acre, down from 40+ bpa last year. We also estimate abandonment at 25%. Most of the spring wheat that wasn't worth harvesting was also too thin to bale in our area."

"I would say our yields in our trade territory will average somewhere in that 47-bushel-per-acre area," said Jeff Kittell, merchandiser for Border Ag and Energy in Russell, North Dakota. "Quality was good with no vomitoxin, and our protein will average 14.0%. We had no significant amount of wheat acres abandoned."

Keith Brandt, general manager of Plains, Grain and Agronomy in Enderlin, North Dakota, told me, "Spring wheat yields ended up at 65 bu/acre. Good quality, 14.0 pro. Nothing baled up in southeast North Dakota. Look for about 10% increase in planted acres in 2018. Part of this is price related because wheat will cash flow, but maybe a bigger part is getting wheat in the rotation for weed control and getting a crop harvested earlier, so they can come back to do ditching, tiling and/or make effective use of cover crops -- all beneficial ways to improving soil conditions."

A shuttle loader in eastern North Dakota told me that his area had an average crop of wheat with protein about a half of a percent over the average. "We were hurt by some dryness, but nothing was wiped out in the valley. The area in east-central North Dakota averaged around 75 bpa and 14.2% pro." He also noted that early talk is for a little more wheat planting intended and less corn, but "it's still early."

In northwestern Minnesota, Tim Dufault, who farms in the Crookston, Minnesota, area said his wheat was "right at 75 bushels per acre, about the third-best-ever yield. Quality was good also. One variety of seed was under 14% protein, but for the whole crop, I would estimate my pro will be a hair over 14%. Test weights and color were also good."

"I am a board member of the Minnesota Wheat Research and Promotion Council," said Dufault. "That is the group that takes the checkoff fee and promotes our wheat through the U.S. Wheat Associates. At our board meeting Nov. 16, the ones that were there said they expect there would be a lot more spring wheat planted next year (we are a nine-person board and not everyone was at the meeting). A lot of them also said this year's wheat crop was their best ever. Those present farmed from west-central Minnesota all the way up to the Canadian border."

Next, let's take a look at how North Dakota farmers did on their durum... what there was of it.

According to the NDWC Quality Report, the 2017 northern durum crop averaged a No. 1 Hard Amber Durum grade with an average protein level of 14.5%. While average vitreous kernel content is at 88%, rains in areas did adversely affect the color on a portion of the crop. Also, effects of the drought were seen in the lower thousand kernel weights (average is 38.4 grams) and larger percentage of medium-sized kernels.

The report also stated that durum production in Montana and North Dakota in 2017 is down significantly due to a small decline in acreage and to sharply lower yields, as the region was afflicted with serious drought conditions. Durum production in the two states combined is 41.5 million bushels (1.13 million metric tons), less than half of 2016's production.

HOW DID CANADA DO THIS YEAR?

"Statistics Canada's most recent reports have estimated prairie durum yields at 31 bushels per acre, well below the five-year average of 41.8 bu/ac. With seeded acres expected down an estimated 16%, estimated production of 4.3 million metric tons points to the smallest crop in six years.

"Provincial government crop estimates were more optimistic," said Jamieson. "The Saskatchewan government's provincial average is pegged at 36 bu/ac and the Alberta government's average at 35.8 bu/ac, which could point to high odds of an upward revision in production estimates when Statistics Canada releases their next round of estimates based on November surveys on Dec. 6."

As for the spring wheat crop, Jamieson said, "Like durum, the overall quality of the wheat crop is extremely high. While the Canadian Grain Commission's harvest sample program does not provide an accurate reflection of grade distribution across the prairies, so far, 4,176 samples of the 4,454 samples tested, or 93.8%, have graded either 1 CWRS or 2 CWRS. The mean protein is reported at 13.01% for all samples submitted, with the mean protein reported the lowest in Saskatchewan at 12.77%. The prairie average is down from the 13.6% reported for all samples tested in 2016."

According to Jamieson, wheat yields on the prairies were seen as highly variable in 2017, with the southern prairies facing drought conditions while many northern areas received excessive -- even record -- rainfall. "Crop quality is reported as well-above-average levels and has led to a rebound in exports from levels seen in 2016/17." 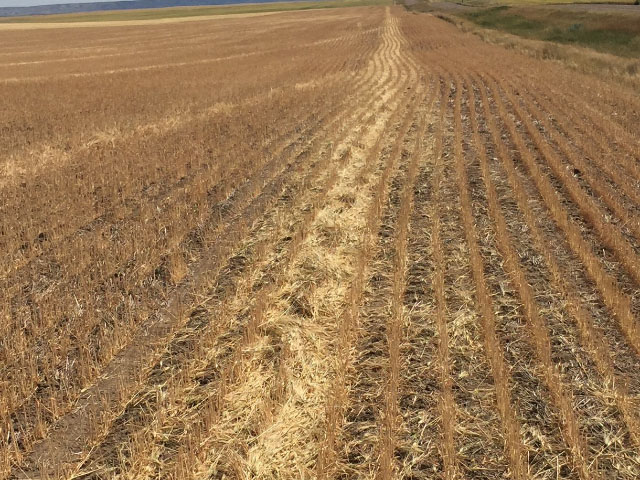