Aging locks and dams on U.S. river systems have been a problem for shippers for quite a while, but hopefully recent action in Washington, D.C., will soon start money flowing toward repairs.

In an effort to get back to the pattern of passing water resources bills every two years, Congress geared up for a Water Resources Development Act (WRDA) in 2016. The WRDA is new legislation that provides critical investment in water infrastructure and includes support for water reuse. It was introduced in the Senate April 26 and passed by the Environment and Public Works (EPW) Committee April 28 by a vote of 19-1. The WRDA 2016 bill is expected to come up for the full Senate to vote on in May.

Included in the WRDA is $4.5 billion for U.S. Army Corps of Engineers (USACE) water resources projects, including $1.65 billion for two Corps flood-control projects in California, one in West Sacramento and the other in the American River watershed. In addition, there is $4.852 billion allotted for drinking water and clean water infrastructure.

The previous bill, passed in 2014 with enormous bipartisan support, authorized USACE to perform various water-related, water resources projects, but had no authorization of funds for drinking water and clean water.

U.S. Senators Jim Inhofe, R-Okla., chairman of the EPW Committee, and Barbara Boxer, D-Calif., ranking member of the Senate EPW Committee, introduced the 2016 legislation, which is the main vehicle for authorizing water projects to be studied, planned and developed by the U.S. Army Corps of Engineers. It is also the legislative vehicle for implementing policy changes with respect to the Corps' water resource projects and programs. The bill did not, as expected, include lockage feeds or tolls to finance public-private water projects.

Waterways Council, Inc., President/CEO Michael J. Toohey issued this statement regarding Thursday's mark-up and passage of the Water Resources Development Act 2016 by the Senate Environment and Public Works Committee: "We thank Chairman James Inhofe and Ranking Member Barbara Boxer for their collaborative efforts to develop a WRDA 2016 bill that addresses inland waterways system priorities. Particularly, we applaud the committee's rejection of lockage fees/tolls to finance public-private partnerships (P3s) on the nation's waterways. WCI is also supportive of the Senate bill's authorization of $16.7 million in modification work for Calcasieu Lock in Louisiana, and for the Brazos Island Harbor project (funded with $116 million Federal and $135 million non-Federal funds).

"We also applaud the provision to remove Inland Waterways Trust Fund capital projects from the five-year/no funding de-authorization rule until Olmsted is substantially off the books. [Editor's note: Olmsted Locks and Dam is on the Ohio River, on the border between Illinois and Kentucky.] We appreciate the return to regular order of WRDA bills every two years. We look forward to working with Senators Inhofe and Boxer, and all Senate members, to adjust the threshold for major rehabilitation as recommended by the Inland Waterways Users Board and the Capital Development Plan. A modern, efficient inland navigation system is a critical link in the transportation supply chain, ensuring U.S. competitiveness in world markets."

It is no secret that the lock and dam infrastructure on the Mississippi River and its tributaries are in dire need of substantial investment in both repair and modernization. It is especially obvious every time there is severe flooding. In 2015, the river was inundated by two severe floods -- one in the summer and one at the end of the year lasting into early 2016. Not only are the aging locks and dams stressed by the high water, but the shoaling that is left behind by floods can be a danger to barge traffic until the USACE can dredge the areas affected.

In addition to shipping delays, flooding along the Mississippi River displaces wildlife. The National Wildlife Foundation said, "For hundreds of miles along the Mississippi River, 'battures' no more than a half-mile wide provide refuge for all sorts of animals, even in cities such as New Orleans and Baton Rouge. Rising river waters have forced many animals up onto the levees and over it into communities." The dictionary defines the term battures as applied, principally, to certain portions of the bed of the Mississippi River, which are left dry when the water is low, and are covered again, either in whole or in part by the annual swells.

The Upper Mississippi River Basin Association (UMRBA) is a regional interstate organization formed by the governors of Illinois, Iowa, Minnesota, Missouri, and Wisconsin to coordinate the states' river-related programs and policies and work with federal agencies that have river responsibilities.

On April 22, Dru Buntin, executive director of UMBRA sent a letter to the U.S. Senate Committee on Environment and Public Works and U.S. House of Representatives Committee on Transportation and Infrastructure thanking them for their commitment to improving the nation's water resources by "undertaking a new water resources development act."

"The Upper Mississippi and Illinois River system is an incredibly valuable commercial transportation corridor that directly connects the Midwest to international markets, lowering input costs for manufacturing, energy, agriculture, and other economic sectors while also facilitating exports. It is a tremendous ecological treasure that draws in $17.1 billion annually in revenue from tourism and outdoor recreation while also supplying affordable drinking water to many of our residents," said Buntin.

Buntin added, "The states further recognize that the river is an economic engine for the national economy and plays a key role in achieving international food security, moving at least 60% of the nation's corn and soybean exports. The river is a critical component of the national surface transportation system and provides a highly valuable corridor for important migratory fish and wildlife habitat."

UMRBA has urged the administration, Congress, industry, and other key stakeholders to identify and explore innovative financing and project delivery approaches where appropriate to maximize infrastructure investment on the waterways. 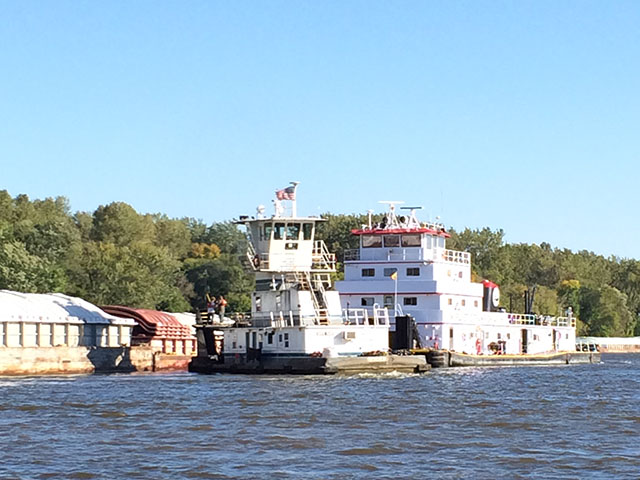