An N542C air seeder drilled soybeans in nearly 2-foot-tall cereal rye and deteriorating corn stalks. It glided across grass waterways and bumpy no-till ground at 6 to 8 miles per hour.

AgriVision Equipment Group of Lenox, Iowa, was one of a few John Deere dealers nationwide to acquire and demo the drill before the N500 series air seeders go into full production in June. The company has 17 locations in western Iowa and Nebraska.

"We'll help work through the bugs," said Tony Douglas, Lenox store manager. "Knock on wood, there hasn't been any yet. Customers can see how it performs, and so far, it's worked pretty much flawlessly."

Ray and Chris Gaesser of rural Corning, Iowa, can attest to that. The father and son farm about 5,600 acres of soybeans and corn. They also do custom fieldwork.

The Gaessers seeded 210 acres of soybeans with the new N542C model, a 42-foot drill with 10-inch spacings, on May 15. It took about 8 hours, though about half that time included setup, uploading field data and calibration.

John Deere developed the N500 series air seeders to replace the more-than-decade-old 90 series, which come in a wide variety of working widths and spacings.

The Gaessers currently use a 1990 42-foot drill with 10-inch spacings to seed soybeans and cover crops. Company officials say the upgraded drill is designed to be more efficient and productive in all field environments.

"The drills we have work well, but this is better," Ray Gaesser said. "We really like the convenience. The seed-to-soil contact is improved."

Douglas said electric drives to power row units instead of being ground driven is one the biggest enhancements. A generator hooked to the tractor's power take-off provides the electricity.

In rough terrain and wet areas, there are times when the drive wheel would not contact the ground or slip, causing seeding issues, Douglas said. Electric motors eliminate that.

Electric drives are easier to calibrate seeding rates and more accurate, Douglas confirmed. Four electric motors will also allow more row units to be shut off from the cab to mitigate over seeding, which saves money and can improve yields.

"There won't be the overlap of beans growing with better swath control," Douglas said. "Air seeders used to be an organized spill of seed. Electric drives keep pounds per acre more consistent."

-- The grain tank is turned around and higher for better access to hoses and meters. It also made clean out easier.

-- Hydraulic downforce can be set in the cab and on the go.

-- New drills are wired for cameras, including inside the tank.

-- A solid axle was changed to a walking tandem to traverse uneven ground better.

-- A brake was added to front caster wheels to make backing easier.

-- The closing wheels are spiked to prevent sidewall compaction and improve seed-to-soil contact.

"The new series is designed to keep farmers in the cab so their productivity stays up," Douglas said. A 42-foot drill can seed 350 to 400 acres in a good day, he continued.

Planting windows are tighter than ever due to extreme weather, the Gaessers said. This year is the perfect example.

Planting is more than a week behind normal in Iowa due to cold and wet conditions and further behind in other states. The Gaessers are fortunate to be done, but they know that won't always be the case.

To prevent erosion and improve water quality and soil health, the Gaessers plant thousands of acres of cover crops annually. All soybean acres are no-till.

"I feel we can get in a cover-crop field quicker after a rain having a nice carpet to drive on," Chris said. "As long as you're set up with a good no-till planting system, planting into it hasn't been a problem. The new planter would make it even better."

Ray added, "Cover crops are the future of our farm, and I think it's the future for agriculture."

The Gaessers only raise seed beans for Stine Seed, so identity preservation is a must. Currently, someone has to crawl in the drill tank to vacuum out seed when switching varieties.

"I can just open a door under the tank to empty it, which is so much easier," he continued, referring to the new model.

"We try to stay current with the latest technology as we can afford it," Ray said. "We're interested in trading (for the demo model), if we can make a deal." 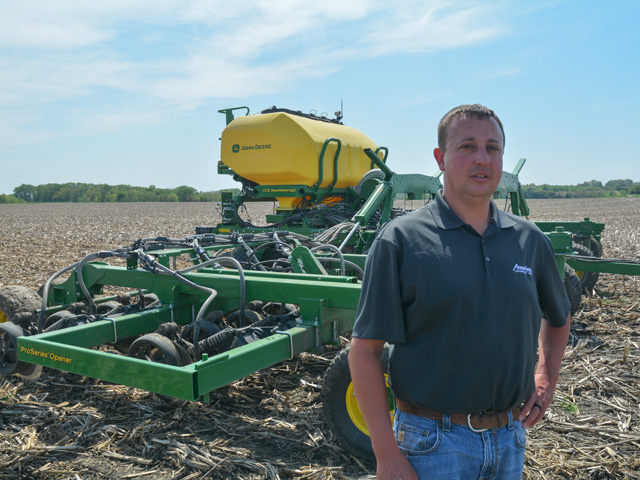