Steve Thompson has been our Ask The Mechanic columnist for too many years to remember. He's built a great following in that time, often calling the folks that write to him, to help them work through their mechanical problems one-on-one.

You can read Steve's columns every month in The Progressive Farmer's digital edition (click on the "Resources" tab above to find the magazine and inside, Steve's Ask The Mechanic columns).

Steve does one better than answering mechanical questions. He also offers a Farm Safety Tip of the Month. These are handy tips all, often taken from Steve's own experiences on his Texas farm.

Here's a sample from Steve's September 2017 column. If you have any questions for him, you can contact Steve at:

TWO TIMES (NOT THE CHARM)

Q: I have taken a Ford loader hydraulic bucket cylinder to a professional cylinder rebuilder two times, and I still am having trouble with it leaking down. After spending around $800.00 and two trips, the cylinder still leaks. After the first rebuild, the cylinder leaked out a hole in the cylinder barrel. I took it back, and they told me that they would rebuild it again and stop the leak. When I got there, they had plugged the weep hole, stopping the leak. However, the cylinder still leaked internally, allowing the loader bucket to leak down faster than before. I took it apart myself and found that the donut had deep bites with what looked like pipe wrench teeth marks on it, and the barrel contained deep scratches. What should I do? How did the deep scratches that ruined the barrel get on the donut?

A: Ask around for a quality rebuilder or try a respected New Holland dealer. The weep hole is there to alert the operator that the internal seal is beginning to leak and is ready for a rebuild. It should never have been plugged. Sounds like the deep slashes in the aluminum donut came from a pipe wrench. I have seen this before. What happened to cause the damage to the donut (then the barrel) is a pipe wrench. The rod screws out of the donut, and when the rebuilders locked the cylinder in the vice, they then tried to loosen the donut. But they did not know that the rod screwed out of the donut. The donut would not turn, and they ruined the donut and the barrel when they installed the scuffed donut in the barrel. Hydraulic cylinders are assembled in many, many different configurations. This was a new one for your rebuilder, but a good lesson for you and our readers.

Q: I always thought that the more fuel an engine had the faster it would run. But, I have noticed on any engine, no matter what size or fuel it burns, that when the engine is running out of fuel, it wants to rev up. What makes an engine rev up when it is running out of gas?

A: The reason an engine revs up as it is running out of gas requires a little bit of thinking. Every engine is set up to explode the compressed fuel and air mixture at a certain time—this is timing. The explosion begins before the piston reaches top dead center on the compression stroke. The explosion begins slowly and increases to a maximum push on the piston. Then, the explosion tails off, just like it began. The timing allows the piston to be headed down when the explosion is at its peak. Now, to answer your question about revs higher with less fuel. As the engine is running out of fuel, the fuel comes into the cylinder "super atomized," which changes the power of the explosion and the timing of the engine because more oxygen than normal is coming in with the fuel, making it more explosive. The more fuel is atomized, the more explosive it becomes. So the super atomized fuel mixture actually gives the engine a more explosive fuel, increasing the RPMs of the engine. This is not a good thing. An engine running too "lean" on super atomized fuel can ruin an engine because it is not designed to run on this "hot" of fuel.

Equipment used around a farm or ranch is very powerful and runs at high speeds with high torque. Therefore, it must be given full respect when in use, whether it is a line trimmer or a piece of harvesting equipment. We leave a damaged hammer handle hanging around our farm shop to remind us of the power of equipment. We accidentally left it in the pickup of a baler on which we had just changed the plunger and stationary knives. The baler sliced off the handle on the first stroke, even before it gained any power from the flywheel. I could replace the hammer handle, but I can't replace a hand. The hammer (called Shorty) serves as a constant reminder on what a piece of equipment will do to your hand if it gets a chance. 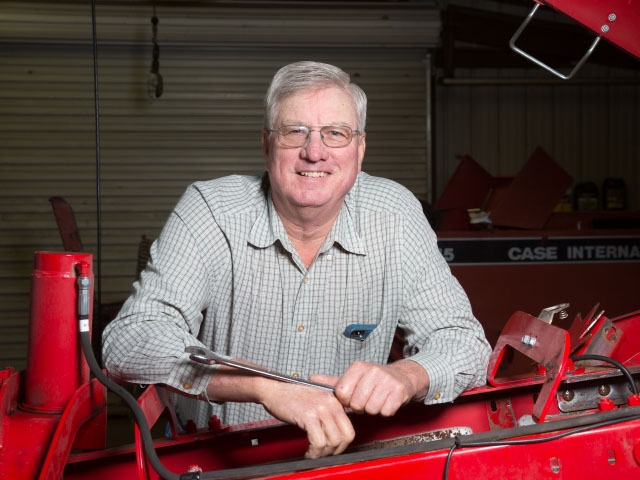