This appears to be a record decline measured in both million acres and on a percentage basis.

This graphic shows the year-to-year change in U.S. corn and soybean planted area in percentage terms from 1981 to 2019.

This year's dramatic drop in soybean area is almost entirely linked to the wet weather which delayed both corn and soybean seedings.

The plunge in the SX2019/CZ 2019 ratio kept farmers in the fields planting corn despite studies suggesting they would have better off taking the prevented planting insurance payment and foregoing their intended soybean seedings.

It turns out that final corn plantings were down about 3.09 million acres from what farmers had indicated in the March prospective plantings report, whereas final 2019 soybean seedings were 8.52 million below what they had intended to seed back in March.

This year's decline tops the prior largest year-to-year drop in soybean area of 14.3% back in 2007, though that was linked more to robust corn prices due to the renewable fuels boom.

The only other year that comes close to matching these large percentage swings in planted area was in 1983 when brimming U.S. corn stockpiles resulted in the USDA unveiling its Payment in Kind (PIK) program that paid farmers in grain not to plant their intended corn acreage.

When the details of this package were unveiled, the USDA had no way of knowing that a wet spring in 1983 would also limit corn and soybean seedings which was then followed by a droughty summer that resulted in well below trend yields of both crops.

This in turn sparked a major market rally that prompted farmers to substantially increase their corn and soybean plantings the following year.

Keep in mind one of the more bearish factors for these two markets this year is the likelihood that both corn and soybean plantings will increase substantially this spring. 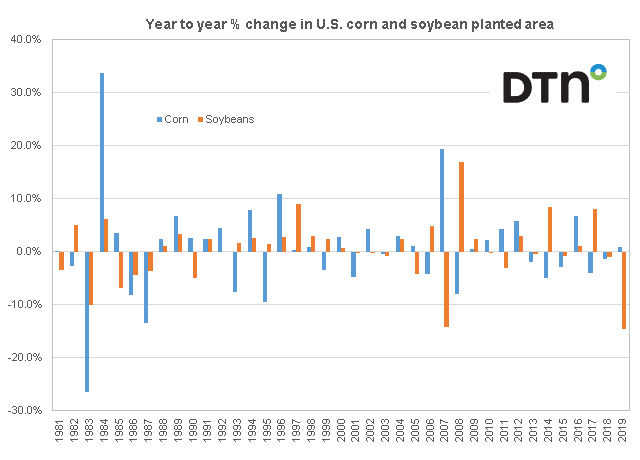 ukelvin1132411137
12/11/2020 | 4:36 PM CST
Hello, If you want to go into corn farm business, There are so many company website this days like http://www.virtatrade.com that will enable you as a beginner to raise the fund you need to start up your corn farm business without you seeking for a loan. This company is where many business dealers from all over the world generate fund that backup their various businesses financially. I used this company to backup my cocoa beans export business each time am running loss financially. You can visit and register with the company website here http://www.virtatrade.com to raise the fund you need now to go into your corn farm business now.