The only change that some expected for last week's USDA December 2019 WASDE corn balance sheet was a lowering of the U.S. export projection from the 1.850 billion bushels (bb) currently forecasted.

As the graph details, current U.S. corn sales and shipments for the marketing year starting September 1 through the first week of December total 609.7 million bushels (mb) and 270.7 mb respectively.

Save for the 2012/13 season when our oversees sales were decimated by the record high corn prices prevailing at that time due in large measure to the devastating 2012 drought, our corn sales and shipments as of the first week of December have never been lower for the past 30 years in bushel terms.

Looking at both of these figures as a percentage of the USDA's December WASDE projection which, as mentioned, remained at 1.850 bb at 33.0% and 14.6% respectively, they are the lowest in 30 years as the current export estimate could be as much as 300 mb overstated. 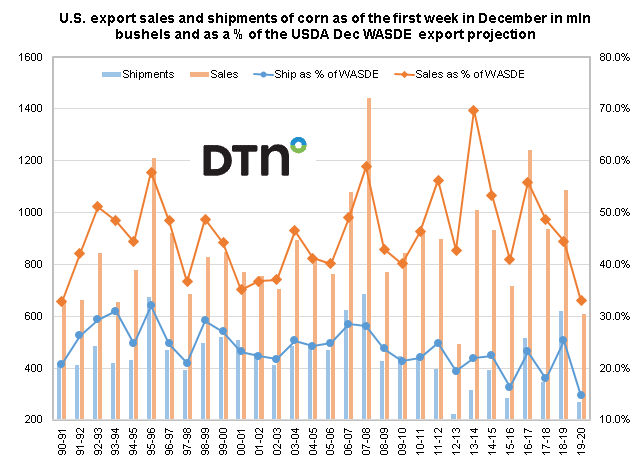