Less surprise this week that U.S. corn ratings came in unchanged at 72% good or excellent vs. the prior week when an expected downgrade did not occur.

The only surprise was that with many of the states showing some downgrades, there was some question as to how the national rating stayed the same.

Regardless, with this the final report close to the end of the month it gives us an opportunity to look at the end of July crop ratings for each of the 18 top producing states for this year, the 1986-2017 average, the highest rated crop from 1986 to 2018 and finally the percent that the 2018 rating is above or below the 1986-2017 average.

Using our usual ratings system (where we weight the crop based on the percent in each category and assign that category a factor of 2 for very poor, 4 for poor, 6 for fair, 8 for good, and 10 for excellent and then sum the results) the highest rated crop is in Nebraska at 824 along with North Dakota, then Pennsylvania and Wisconsin at 812, followed up by Illinois at 806.

For a crop that is touted as being record yield material the only state that has the highest ratings ever is North Dakota, though this is just one of two states of the top 18 (the other being Tennessee) that saw crop ratings starting in 2000 as opposed to the other 16 seeing their ratings start in 1986.

On the opposite side of the ledger, the worst rated crops are in North Carolina, Missouri and Texas with ratings at 572, 590 and 592 respectively. 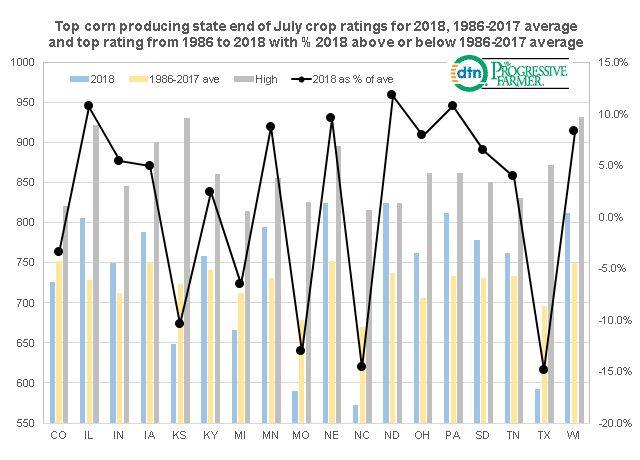 LYLE FISHER
8/6/2018 | 7:54 AM CDT
SE Nebraska is burning up. Corn has turned white and ears dropped. Beans showing heavy stress. There will not be much to harvest here. We are 60 miles south of Omaha. All I hear is how great Nebraska is