What a difference a year makes.

This year is different however, for though the Dakotas are still somewhat in a drought situation, the degree is far reduced from 2017 while other major spring wheat producing regions are having very favorable growing conditions.

This is reflected in crop ratings compiled by the USDA that are far above year ago levels.

This graphic shows national spring wheat crop ratings as of July 1 using our usual ratings system (where we weight the crop based on the percent in each category and assign that category a factor of 2 for very poor, 4 for poor, 6 for fair, 8 for good, and 10 for excellent and then sum the results).

We are assuming that the July 1 rating for the 2018 U.S. spring wheat crop will be similar to the one this week at 768 which if true, would be well above the 596 rating from a year ago which was the second worst in history next to the 394 rating back in 1988.

We plot that against the percent that the July wheat yield estimate deviates from the 1989-2017 trend of the final spring wheat yield.

Keep in mind that the spring wheat crop is still in the midst of its critical head filling stage so weather in July is still very important.

Very good crop conditions at the beginning of July are no guarantee of stellar final yields nor does a lackluster July 1 rating mean all is lost.

This is shown by the yellow circles that report the bushel per acre (bpa) change from the July to the final USDA crop production report. 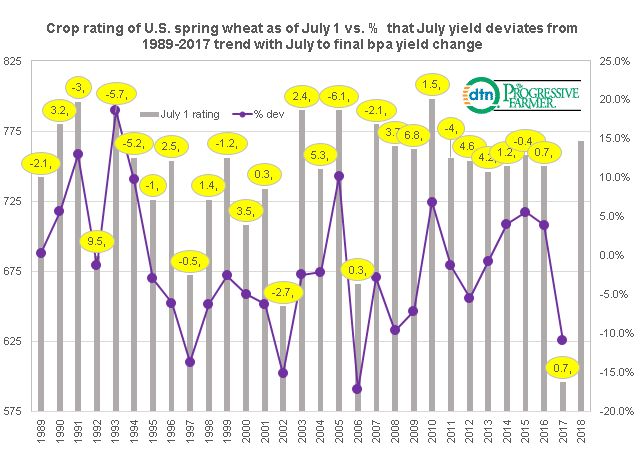