In a land that can be strikingly beautiful and yet brutally harsh in summer, Arizona's approximately 20,000 farmers and ranchers cherish every drop of water from the spotty monsoon rains to highly regulated canal irrigation.

The farmers coax crops, fruits and vegetables to grow, run giant beef feedlots and dairy operations, and contribute to the $23.3 billion in sales of agricultural products in Arizona that help to feed the world, including as far as China. The farmers are proud to say they've been here for generations even as they battle the challenges from weather, government regulations, labor shortages, and even from environmental groups.

However, this year has been even tougher than usual to take.

The entire state is in drought, ranging from moderate to exceptional, according to the Aug. 2 U.S. Drought Monitor Map (http://droughtmonitor.unl.edu/…). It's currently one of the driest -- and hottest -- areas of the nation, with this week kicking off more excessive heat warnings as temperatures were climbing Monday afternoon to as high as 115 degrees Fahrenheit.

This summer, there are fields that lay dormant because cotton crops never got planted at all on family farms for the first time in four generations. There are fields where cotton and alfalfa crops were optimistically planted, grew up and now wither in the triple-digit heat.

The most heat-hardy of crops never got seeded in places because there was limited or no water allotment at all for some of these farms. Water rights are a sensitive, complicated topic, and can vary from county to county out here. For some of those multi-generational farms that depend so heavily on the water rights their ancestors agreed to almost 100 years ago, they admit those agreements don't work anymore for their needs. Some of those farmers are restricted to only use irrigation; they can't use well water on their fields, nor can they store groundwater for later.

For those who do have better water right conditions, access to available water, and the money to pay it, they can grow their crops -- but the water costs have skyrocketed.

Riverbeds sit empty, as do a lot of the canals. In farmhouses, people are careful with the small silty water allotments they might get from wells on their property.

In the hot afternoons, multiple dust devils swirl and climb into almost cloudless skies. On Aug. 2, a giant dust storm -- called a haboob -- raced across the desert at 70 miles per hour and slammed into Phoenix and surrounding area: 70 miles wide and 5,000 feet high, the storms snapped tree branches in some places, and plowed over whole trees in others (https://www.azcentral.com/…). It was the worst dust storm of this year. So far.

Determined farmers will continue to grow whatever they can in the desert soils. Months before they plant, they get letters informing them of their water allotments for the season and this influences what crops go in the ground. Yet, the producers know that allotment can change to much less or even nothing. They carefully watch what happens with the Colorado River Watershed and Lake Mead -- the largest water reservoir in the U.S. If there is a shortage of water in those locations, there won't be water sent down those carefully monitored irrigation canals to reach the farmers' fields.

The drought is having an impact, but there is even greater pressure coming from another direction as various interests compete for the precious water here in the desert.

Arizona, estimated at 7.1 million people this year, has one of the fastest-growing populations in the country. An article Sunday in The Arizona Republic noted that Arizona's population is expected to jump to 8.1 million by 2026, with Phoenix alone leaping from 4.8 million to 5.5 million by 2026.

While there are regulations that say in Arizona's urban areas there needs to be a proven 100-year supply of water before land can be developed, there is no tap to turn off the people overall pouring into the state when there isn't enough water.

While not as dramatic as a haboob racing across the desert, the longer-term impact of that growing population fighting for precious water is a much more daunting and longer-lasting challenge for Arizona's farmers and ranchers.

Elaine Shein can be reached at Elaine.shein@dtn.com 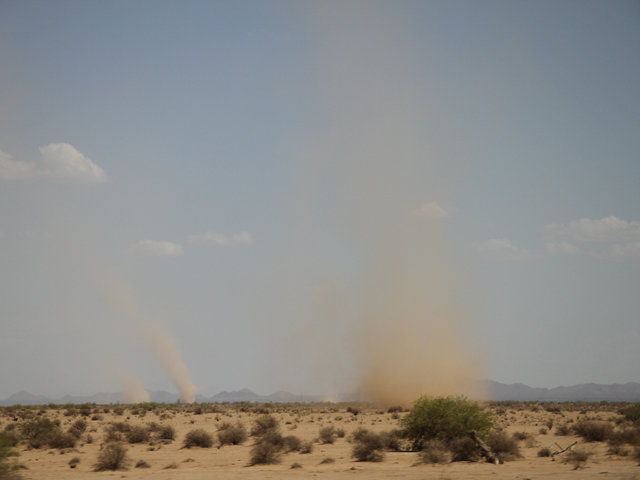