DTN Grains Analyst Todd Hultman released an excellent analysis on the potential storm clouds brewing in terms of trade relations between the United States and China. (Soybeans Gathering Storm, http://bit.ly/…). In 2015/16, 28% of the U.S. crop was shipped to China, while so far this crop year, U.S. exports are up 23% from the previous year with a growing share destined for China.

At the same time, Hultman points to the growing rhetoric between President-elect Donald Trump and China's leaders. One perspective of what's to come originates from the United Kingdom's The Guardian which reported on China's state-run Global Times by quoting "A batch of Boeing orders will be replaced by Airbus. U.S. auto and iPhone sales in China will suffer a setback and U.S. soybean and maize imports will be halted."

An escalation of this conflict could be a double-edged sword for Canada's markets, as soybean futures could face considerable pressure, especially with such a significant net-long futures position held by investors or noncommercial traders of 136,574 contracts as of Dec. 20. On the flip side, Canada's export potential should face a boost and could help pave the way for increased acres this spring.

As seen on the attached graphic, the Canadian Grain Commission's recently released Exports of Canadian Grain and Wheat Flour report for November shows 2.224 million metric tons exported by Canada as of the end of November (grey bars). This is the highest volume shipped ever as of this date and has increased in each of the past two years. The average of the previous five years is 1.520 mmt for this period.

Also of interest, the Grain Commission's week 20 statistics for the week ending Dec. 18 shows cumulative exports at 2.6239 mmt, up 19.7% from the same period last year. As well, commercial stocks are reported at 558,700 metric tons, up close to 65% from the average of the past three years.

The blue line represents the growing share of the cumulative volume which is shipped to China in the period ending in November. As seen over the selected period on the attached graphic, no soybeans had been shipped to China in the period ending Nov. 30 in the 2008/09 crop year, while in the current year 50.8% of the total volume shipped was destined for China, or 1.131 mmt of the 2.224 mmt shipped.

Given uncertainty in trade between the U.S. and Canada along with weakness in the Canadian dollar against its U.S. counterpart, this trend will likely continue with Canada's supply being the limiting factor. This comes at a time when estimates have pointed to Manitoba growers potentially boosting acres dedicated to soybeans for the tenth consecutive year by close to 25% to reach a record 2 million acres in 2017, while Ontario growers could also follow the expected trend of the U.S. farmer to plant a record crop in 2017.

Previous Post (U.S. Sales of Red Spring Wheat to Canada)
Next Post (What Lies Ahead for the Canadian Dollar?) 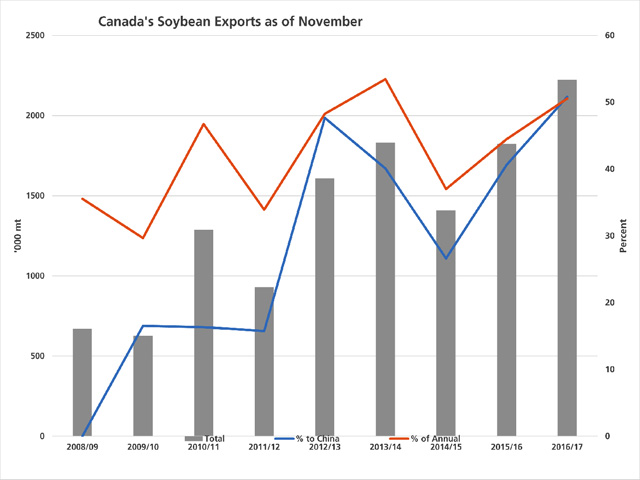