With its latest half-point increase, the Federal Reserve has raised interest rates 4 1/4 percentage points this year, putting the benchmark federal funds rate in the 4.25% to 4.50% range. The rates ordinary borrowers pay have risen in tandem.

Farmers, ranchers and other business borrowers want to know how high rates will go and how long they'll stay high before the Fed starts cutting again. The Fed has an unwelcome answer for them. Financial markets have a more optimistic one. The Fed's rate setters are projecting a 5%-to-5.5% range for the end of 2023, a half-point higher than they were estimating in September. (https://www.federalreserve.gov/…) They don't see rates beginning to come down until 2024.

At his press conference following the latest rate hike, Fed chair Jerome Powell stressed that the Fed won't stop raising rates until it's convinced inflation is on a sustained path to 2%. The deceleration of price increases in the last two months wasn't enough. Indeed, Powell said the Fed's outlook is for "slower progress on inflation, tighter policy, probably higher rates, probably held for longer." (https://www.federalreserve.gov/…

Tighter, longer is not how equity investors had been seeing things. Up until Powell's press conference, the stock market had been rallying. Investors had seemed convinced that inflation will continue to fall, nearing the Fed's 2% inflation target by the end of next year, without the need of a recession.

The bond market had been just as optimistic about the direction of inflation and rates. Even high-risk junk bonds had been rallying.

The 19 members of the Fed's rate-setting Federal Open Market Committee, by contrast, see inflation (as defined by its preferred measure, the personal-consumption expenditures index stripped of food and energy) falling far less -- to 3.5% by the end of next year from 5% in October.

This isn't the first time the Fed and the markets have differed. For most of this year, Powell has been warning that the Fed would accept a recession if that's what it takes to conquer inflation. And for much of the year, investors have been betting that a slowing economy would undermine the Fed's resolve. For two months last summer, markets seemed convinced the Fed would be lowering rates next year. (https://www.dtnpf.com/…)

You could say this means the Fed has a credibility problem, and it does. Having been dovish on inflation in 2021, Fed officials may feel they need to sound twice as hawkish now to be taken seriously. The market may well think the Fed is talking tough now because it needs to reestablish its credibility.

Even if that's true to some extent, though, it doesn't mean the Fed is bluffing when it talks tough or doesn't believe its own forecasts.

In the Fed's forecasts, next year will end with unemployment at 4.6% (a percentage point higher than the current rate but a percentage point below the long-term average) and annual GDP growth at 0.5% (sluggish, but not quite a recession), along with inflation at 3.5% (too high).

That's now how the markets see the situation. Some investors think there will be a recession, some don't, but either way they believe inflation will have come down significantly faster than the Fed is predicting.

What neither the Fed nor the markets have reckoned with is a borderline outcome. What would the Fed do if inflation comes in better than it's forecasting but remains above its target?

If that happens, will the Fed declare victory and start cutting? Or insist on proof of 2%?

If you asked Powell, he would likely refuse to predict the Fed's reaction, responding instead with his oft-stated general refrain: "I wouldn't see us considering rate cuts until the Committee is confident that inflation is moving down to 2% in a sustained way."

Markets think the Fed would cut. You can see this most clearly in bond prices, which have barely budged since Powell spoke. True, stock prices have tumbled -- a recession would hurt equities far more than debt securities. But despite the old market adage "Don't fight the Fed," the stock market could well test the Fed again if inflation continues to abate.

Farmers, ranchers and other business borrowers don't want a recession. Still, they have to hope the markets are right. 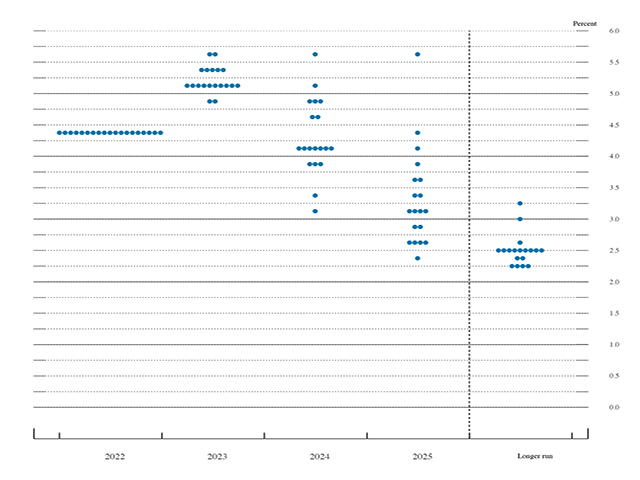